‘I am not resigning’ -Akufo-Addo 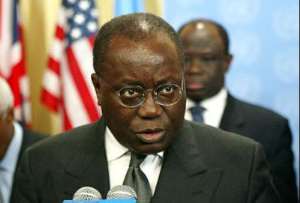 Akufo-Addo dispels rumours about quitting govt The Minister for Foreign Affairs has dispelled rumours that he is to quit his position in order to concentrate his highly anticipated campaign to become the New Patriotic Party's presidential candidate in 2008.

Speaking Thursday in an exclusive interview with The Statesman, Foreign Minister Nana Addo Dankwa Akufo-Addo instead spoke of the need for the present government to remain united in dedicated service to the nation in order to retain power in the next general elections.

“I'm not persuaded by the argument of resignation at this crucial stage of President Kufuor's administration. The ultimate goal of any serious political campaign is to win power. So, to then take a premature decision to step out of government for the single purpose of campaigning would, in my view, be curious.” Rather, the Foreign Minister thinks the attention of the ruling party should remain firmly fixed on delivering now so they will have a firm foundation for their 2008 election bid, and a history of solid achievement to back it up. It started as media speculation late last year but has since gained a life of its own in Ghanaian social circles both at home and abroad. The speculation that the three-term MP for Abuakwa South was about to resign was motivated by concerns from his sympathisers. The concern was that whilst Nana Akufo-Addo was piling up international air miles as Foreign Minister his colleagues back home who are also interested in the succession race were busily crossing the country scrambling for patronage.

Meanwhile, with rumours of a ministerial reshuffle in the air, those who wish for the Abuakwa South MP to be brought home are likely to be disappointed. President Kufuor is expected to maintain his confidence in his 1998 rival, with Ghana now a non-permanent member of the United Nations Security Council. The two fiercest rivals in the 1998 presidential primaries of the NPP have shown a remarkable reciprocity of respect, loyalty and admiration for each other, especially since the President chose the Abuakwa MP as his Foreign Minister in 2002.

He disclosed to The Statesman some of Ghana's duties on the 15-member Security Council. “We have been given the chairmanship of the Iraq Committee. This we believe is a sign of a stature on the international scene and the confidence that the world has in our leadership.

“The next two years are going to be challenging for our diplomacy. There are several high-profile issues on the globe and in our continent, the resolution of which we are going to be in the centre of. It's my hope and prayer that the manner in which we execute our mandate will enjoy the support of our society and the political class so that there is a broad national endorsement for the foreign initiatives of government.”

Without a hint of complacency, the Foreign Minister does not particularly see his portfolio as deleterious to his unhidden presidential ambition. “Our political tradition has shown time and again that it does indeed recognise and reward dedicated service to party and country,” he said, stressing, “once the party gives the campaign signal, I'm sure those of us with legitimate interest will have an equal shot at the prize.”

He may draw inspiration from Tanzania, where in May 2005 Jakaya Kikwete, the country's foreign minister, was nominated by the ruling party as presidential candidate.

By mid-December, he had won the East African country's presidential election with an overwhelming 80.2 per cent of the total vote.

Mr Kikwete has promised to continue the free-market policies of the former president, Benjamin Mkapa, who stepped down after two terms in which he consolidated the East African nation's reputation for stability. Rumour about Nana Akufo-Addo's alleged intention to resign was inspired by the jostling of some potential candidates to influence the elections at various party levels for delegates.

He notes: “The origin of the resignation rumour gave ample evidence for the story to be treated with caution. That paper is neither a lover of mine nor the party and would love nothing better than to see me out of government.” “Nana Akufo-Addo Is Out!' was the banner headline of the Lens of Tuesday, November 8, 2005.

The story read: “Officially, he still is Ghana's Foreign Minister. But The Ghanaian Lens can reveal today that Mr Kufuor's Foreign Minister, Nana Addo Dankwa Akufo-Addo has served notice on the President of his intention to resign from the government for 'personal reason'”.

The Independent added credibility to the rumour on Monday, November 28: 'Fallout from looming reshuffle: AKUFO ADDO TO RESIGN'.

Both papers cited “reasons of concentrating on his campaign.”

But, yesterday, the Foreign Minister emphasised: “I have no intention of resigning and I'm determined, so long as President Kufuor so wills it, to continue to play an active part in his government. The success of his government is critical to our future chances in the 2008 polls and I'm committed to contributing my quota to that precondition of success for a 2008 NPP victory.”