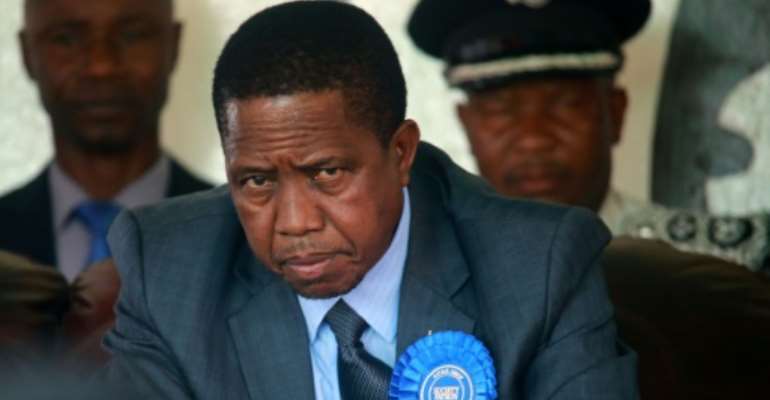 Zambian President Edgar Lungu has moved to strip London-based Vedenta of its prize asset in the country in a tax dispute. By DAWOOD SALIM (AFP/File)

Higher taxes on the mining sector were supposed to help Zambia with its debt problem, but Lungu has taken a hardline approach with international mining companies, accusing them of failing to pay taxes and threatening to expel them from the country.

"Government will not take kindly to any form of arm-twisting," he told a recent mining and energy conference.

"Government's expectation is for investors to operate within the confines of the law -- failure to do so will result in government imposing sanctions and disengaging with the unwilling parties."

Lungu, 62, has pledged to dissolve KCM, threatening Vedanta with "divorce" and saying "enough is enough" in the dispute over taxes -- winning cheers from his supporters.

Companies from Turkey, Russia, India, Canada and China are all interested in buying the Vedenta unit, Lungu told Bloomberg News this past week, adding that talks on a sale could be completed within one month.

Vedanta says it hopes for a negotiated solution, but the High Court dismissed its application to join the liquidation proceedings.

The company -- which employs 13,000 people in Zambia -- has denied all wrongdoing and accused the government of making "unfounded allegations" over unpaid taxes.

It says it is a loyal investor in the country, but that its business is unprofitable due to rising tax and electricity bills.

While his move against miners was ostensibly made to boost the economy, observers also point to political interests: wooing support in the mineral-rich Copperbelt region, where KCM's mines are located, could prove crucial to winning the next general election due in 2021.

"There is political motivation in the attitude to KCM because the cries of the people were getting louder -- so the government ignorantly said they were liquidating the mine," said Charles Milupi, a leader of the Alliance for Development and Democracy (ADD) opposition party.

"They should have considered the livelihoods of the people who depend on KCM," said Milupi, a former consultant at the company, adding that the dispute meant "investors are jittery to come to Zambia".

Analysts believe Vedanta, owned by Indian billionaire Anil Agarwal, could be replaced by a Chinese company.

Copper provides 70 percent of export earnings, and the nation's foreign debt has more than doubled since 2014.

Lungu seems determined to escalate the battle with Vedanta, but Chishimba Kambwili, who leads the National Democratic Congress (NDC) party, told AFP that the government must change course.

'The government should immediately reverse the liquidation of KCM. It is either they appoint a receiver or embark on a rescue plan," he said.