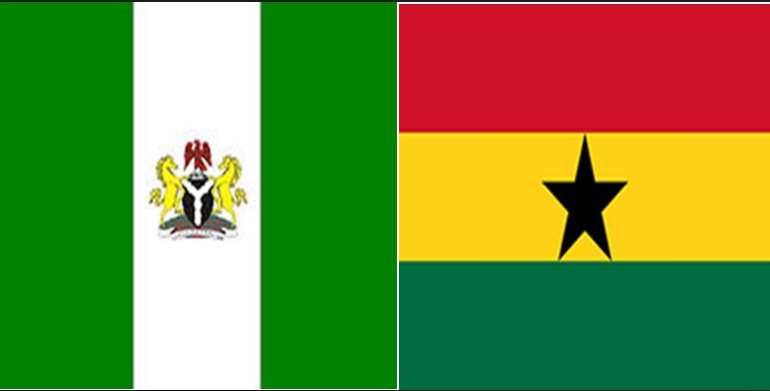 It seems like a 'WHO IS WHO CONTEST' in the West African Sub-region. The two former colonial nations of Ghana or Gold Coast if you like and Nigeria seem to be at it again. The two countries are all resource rich, fertile lands, green most part of the year, with additional natural resources in the belly of the earth. These resources certainly attracted the colonial masters unto our lands and shaped our destiny in the way they wanted, which sadly, we have not been able to re-shape to the needs of our modern situations and realities.

I am sure some Nigerians were in this country long before my grandparents were born. I came to meet them, in the primary school through to the Middle school; I had Nigerians in my class. The Civil war in that country in the 1960s saw a huge exodus of Nigerians particularly those from the then Eastern Nigeria, the Igbos predominantly came to Ghana. I lived with some of them in the Railway quarters in Takoradi until the Aliens' Compliance Order which saw many of them back to Nigeria.

That notwithstanding, I still found Nigerian classmates later in the secondary school, many of whom we still chart on our various school Whatsapp platforms. At the Ghana Institute of Journalism, I still had Nigerian mates but I don't remember having one at the post-graduate class at UCC later on in my life.

As a young man, I joined the Agege exodus to Nigeria in 1980 when I was supposed to be in Lower Six when Nigeria's oil boom in the 1970s had attracted the attention of the world. Ghanaians of various ages and classes had left this country for Nigeria, particularly teachers. When I was writing my O' Levels in 1979, we had very few graduate teachers in our school because most of them had left for Nigeria to fill the vacancies in their schools.

In the Lagos State for example and other UPN controlled states of the late Chief Obafemi Awolowo in the south, free secondary educational policy had been instituted and many structures in Lagos State in particular were springing up under Lateef Jakande, the Governor. Ghanaians and other foreigners from the sub-region had jobs to do. There are very good and loving Nigerians in that country, but there are equally a few bad guys as it happens everywhere in the world.

In some cases, Ghanaians would work for what we called 'Oga Oga Companies in the construction sector and some of them would not pay us. I moved from Lagos, Anthony Village to be precise to Abuja in 1981 when the construction of Abuja had begun in earnest. It was a vast bare land sparsely populated by small villages with the indigenous Gwari people. Many of us Ghanaians lived in a village called Wuse. The last time I visited Abuja in 1995, to cover the AGM of African Development Bank Wuse had become a modern sprawling suburb of Abuja.

I remember in the chilly weather of December 1981, we had the wind one evening that Ghanaians in Wuse were going to be attacked. We could not sleep until we were sure it was not going to happen. Indeed the threat was real and we had to gather ourselves at the small Police Post manned by less than four Police Officers. Women and children in the open compound of the Police station at the mercy of the harmattan onslaught in this part of Nigeria. Nothing happened to us though.

This experience compelled us to properly organize ourselves in the name of 'Ghanaian Residents Association in Abuja'. We wrote our Constitution and submitted same to the Chief Inspector at the Police Post. Yours truly was the Secretary, young as I was. We engaged in communal labour every Sunday to clean up the community, an act which was alien to the people. These endeared us to them and we lived together. Nothing bad happened to us until the expulsion order by the Shehu Shagari administration in 1983. Even as we were leaving some of them were urging us to stay.

By 1983 when Nigeria was seriously spending on the new Federal Capital of Abuja, oil prices slumped to as low of USD10.00 per barrel thus creating a huge budgetary deficit for the economy. Some of the projects had been suspended, the economy was shrinking and job opportunities were dwindling. 1983 was also an election year. In such scenarios, foreigners become the easy targets for the misfortunes of the host country for both political reasons and economic realities as well.

Nigerians had their own inter-ethnic problems to contend with, deep seated one as that such that if a Yoruba person happened to be a Foreman in a company like Julius Berger, a German Road Construction firm, and had to recruit, he would choose a Ghanaian or other foreigner than an Igbo and the Igbo Foreman would not engage the Hausa person nor the Yoruba, so foreigners were preferred in such scenarios.

However, in many instances, the excuses that excite policy decisions on foreigners in many African countries are the upsurge of crime. In those heady days in Nigeria, not a single day passed without the incidence of one armed robbery having been committed in one place or the other. Some innocent people were burnt alive on mere suspicion of having committed an armed robbery. And when the issues were being discussed in the very vibrant Nigerian media which further propelled me into journalism when I came back home, foreigners, particularly Ghanaians were blamed for the armed robbery and other such crimes.

Fair minded Journalists like the late Dele Giwa, Ray Ekpu, Yakubu Mohammed and Dan Agbesie were such a delight to read in the Concorde Group of newspapers. The truth also of the matter is that, at the time when Ghanaians for example were being accused of armed robbery, that act of criminality was unknown to this country, yes. Nigerians diverted their attention from their citizens unto foreigners for all the crimes that went on there. Does anyone remember the 'Black Maria' episode that saw six Ghanaians roasted to death in a Police van in 1980?

Armed robbery did not stop with the mass exit of foreigners from Nigeria, indeed it progressed into greater dimensions into kidnapping of staff of multi-nationals and others which is germinating in Ghana with our nationals too. Nigerians can't operate successfully in this country without the collaboration of our nationals.

The bottom line, when I read of the arrest of such young energetic Africans, be they Ghanaians or Nigerians, my conclusion is these are the products of failed leadership in Africa. The massive corruption in Nigeria which diverts resources which otherwise would have improved the lives of the young ones, is one major cause of criminality. It is fast growing in Ghana too don't let us kid about it.

As for the image of Nigeria being tarnished by Ghana, my plea to the Nigerian Professor is that his country has a bad image internationally and that it is their responsibility to clean up the mess. On a tour at the US Immigration and Border facility in Florida in 2000, we were told that Nigerian immigrants are those they open their eyes widely when dealing with. Clean up your mess, and Ghanaians should stop demonizing Nigerians in Ghana because there are very excellent intelligent Nigerians in our midst. They are indeed hardworking. Let's live together within the laws.