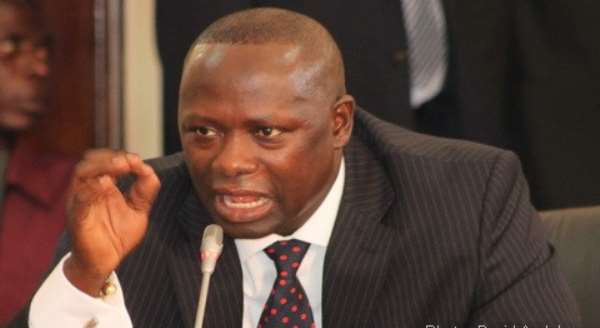 Former Minister for Petroleum Emmanuel Armah Kofi-Buah says it is disgraceful that the President Akufo-Addo government is shifting the target of the Renewal Energy Policy despite the progress made by the previous administration.

According to him, the policy, as captured in the Renewal Energy Act passed by Parliament, had targeted 2020 as the year for Ghana to achieve ten percent renewable energy.

The Act provides for development, management and utilisation of renewable energy sources through the commission.

But, the current administration, he revealed, has shifted the initial goal from 2020 as set out by the previous administrations of President John Evans Atta Mills and John Dramani Mahama to 2030.

Emmanuel Armah Kofi Buah made the revelation in Parliament on Tuesday 18th June 2019 when he contributed to the debate on advancing renewable energy development in the country.

"If you look at our Renewable Energy Policy right now, especially as it was reflected in our last budget, we have moved the goal post. And that is the correction I want to make, that the goal that we had envisioned, was to reach ten percent renewable energy by 2020. But, because it was very clear and obvious that we can not meet that obligation, we moved it to 2030", he said.

He explained that the government has shifted swiftly from the initial position to the current position due to failure to acknowledge and comply with the blueprint developed by the previous administrations "So that is our policy now, that in 2030, we will have ten percent renewable energy".

According to the Lawmaker, the Renewal Energy Policy developed by the previous administrations, had in its content, three components of activities simplifying the implementation of the policy.

"Mr. Speaker, the Renewal Energy Act was a very important Act that was passed by this house, and had three critical features, one was the Feed In Tariffs (FIT) and that FIT had envisaged that because our big hydros are all gone, the key to adding more energy and increasing our power is through private sources, individual homes, and what will happen is that, we are going to give incentives to private companies and solar panels will be across the country and so Real Estate developers will be given incentives for every house being built in Ghana, will have a solar panel", he noted.

Armah Kofi-Buah who has been credited for playing an instrumental role in positioning the country's energy sector following several years of power crisis said the Mills-Mahama governments had intended involving many more hands to increase solar power production in the country in the shortest possible time.

"So when I build my house and I know that I have a solar panel, I can feed into the national grid and I will be paid for it and that will be enough incentive for everybody building a house to have solar panel", he opined.

He added that "Mr Speaker, as I speak, that processes leading to really encouraging individuals to do that, has been stalled. This is because the issue of net metering and the discussions of guaranteed price by Public Utilities Regulatory Commission (PURC) and the Energy Commission has stalled, so on that score, we have not made too much progress in that sense".

He reminded Parliament of another remarkable feature of the Act, that was critically emphasizing that producers of power must secure guaranteed platforms to market it.

"Mr Speaker, there was also a purchase obligation in the Renewal Energy Act, that called for all power producers to make sure that there is a guarantee that once I produce the power, Power Distribution Service (PDS) must buy it and so it was enough incentive", he emphasized.

W/R: Five wounded after residents of Ampatano and Kamfakrom ...
30 minutes ago