We Are All Prostitutes 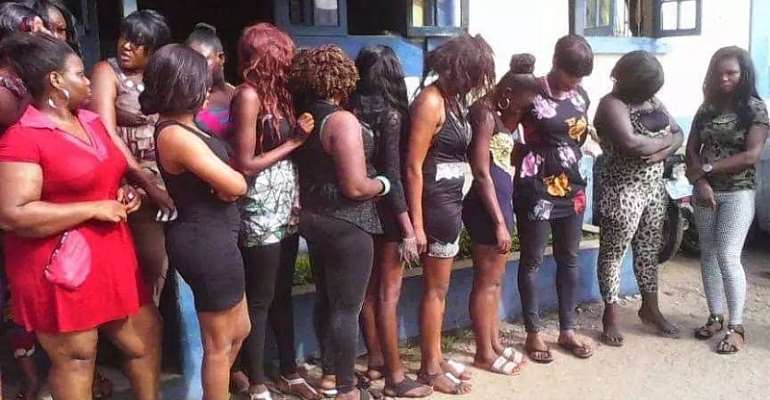 The raids on nightclubs in Abuja and the subsequent arrest, prosecution, and conviction of only female attendees for prostitution have constantly agitated my mind, compelling me to confront the notion of prostitution. In an attempt to legitimize this illegality, the police invoked the constitution and religion specifically Christianity and Islam. The police claimed that prostitution was legally and religiously forbidden. But are the police actions in any way justified? There is a problem with the everyday usage of the term, prostitution. In fact, the popular impression of prostitution seldom reflects the reality of sexual practices in the society. If we are to strictly go by the definition of the term, prostitution, that is engaging in sexual activity for payment, we are all prostitutes.

Yes, we human beings are actual and potential prostitutes depending on where we are within the spectrum of negotiation of sexual activities. Unfortunately, prostitution is presented in a way that reveals so much self-deceit and double standard, sexism, and misogyny. Prostitution is feminized and postulated as a moral crime that only (unprivileged) women commit. Meanwhile, the sexual urge is a fundamental driver of human behavior.

So it has become imperative to soberly highlight these contradictions and adequately situate the issue of prostitution in a way that mirrors the full range of human sexual proclivities as they play out in society. It has become pertinent to foreground the skewed thinking and moral hypocrisy that is used to distort this social reality and hide the truth about the intricacies of human sexual activities including how humans behave in the open and behind closed doors.

To be honest to ourselves, we are all prostitutes because we engage in sexual activity for one form of payment or another. We may dislike the label or may not want to be associated with the baggage of humankind’s oldest profession. But let’s face it, we human beings engage in sexual activities with overt and covert intent to gain or profit, to be paid or be rewarded. The heartbreaks and disappointments that people experience in relationships! Are they not due to a breach of trust, a discontinuation or better a sudden voiding of the payment contract? Payment must not necessarily be in the form of cash: in naira, pounds, euros or dollars. Must it? Payment can be made in kind, and in various kinds. Payment must not explicitly be demanded. Men and women engage in sexual activities sometimes for some undefined vague purpose; for some unclear supposedly “agapeic” unconditional intent. Still, that does not negate the fact that the intent can be reduced to monetary terms and gains, or that such an affair would somewhere, somehow or at some point involve cash rewards and benefits.

Let me put it a bit differently. Adults consent to having sex for some reason; or for some purpose. And that is morally legitimate and permissible. But you know what? That reason or purpose is a form of payment given, received or expected. We may not necessarily call it a payment. We may not even want to openly admit to receiving cash or expecting to receive something for or as part of short or long-time service. We may call the affair by other names to disguise the intent to make or receive payment. We may call it a romance, a treat, a fling, a date, friendship, love, marriage, partnership, or cohabitation. But fundamentally it is a relationship that involves sex or some sexual activity with payment implications. Simply put, it is an activity that at the end of the day involves something that is mutually given or mutually received. That something can be substantial or symbolic, material or immaterial, in cash or in kind or both.

Incidentally, the popular impression of prostitution supposes that very thing to be physical cash (and the receivers to be women). That is where the mistake lies. Let’s not forget, sexual affairs predate the introduction and use of money/cash payments in human transactions. So, things that are offered in exchange for a short time or lifetime of sexual activity need not be in fixed immediate cash. They are not perforce exchanged at nightclubs, on the red light streets and districts. It could be a night in a hotel; an-all-expenses paid vacation in Dubai or a trip to London, a scholarship. It could be an apartment in a city of choice, a job in an office, a political position or an office promotion, a good grade in a course, a document to travel, live or work overseas. Payments for sexual activities take place in corporate places, in government houses and offices at the state’s expense; at police stations and military barracks, at prayer houses and law chambers, at governors’ lodges or legislative quarters, at Chiefs’ and Emirs’ palaces, at 2-star, 3-star, 4-star, 5-star hotel rooms, and retreat venues for politicians and civil servants. Police do not raid these places in search of prostitutes or dare prosecute anyone. That does not mean that these activities are not prostitution as defined. Exchanges in cash and kind for sexual activities take place in these places and at other facilities that are meant for the rich and powerful but they are not designated as prostitution. In fact, sometimes the transactions are carried out, coordinated and monitored by law enforcement agents, by police, military and secret service escorts. So, enough of this hypocrisy!

Humans are goal-oriented intentional beings. They indulge in sexual activities or in fact in any other activities expecting some reward, some payment, concrete or abstract, in cash or in kind. Even politicians who distribute money on the streets or persons who give alms to the poor expect some reward or payment. They are paid back with votes or with cheers and praises. So human beings do not engage in sex without some expected monetizable benefits, without a purpose that involves payment in one form or another, in the short or long term, directly or indirectly. So, it is absurd to scapegoat women as prostitutes or to narrow down the meaning of prostitution only to transactions that transpire at strip clubs or brothels. It is in our nature as human beings to profit from our activities whether they are sexual or not. So by and large, we, human beings, as men and women, whether we agree or disagree, indulge in sexual activities for some payment or for some benefit. Hence we are all prostitutes.