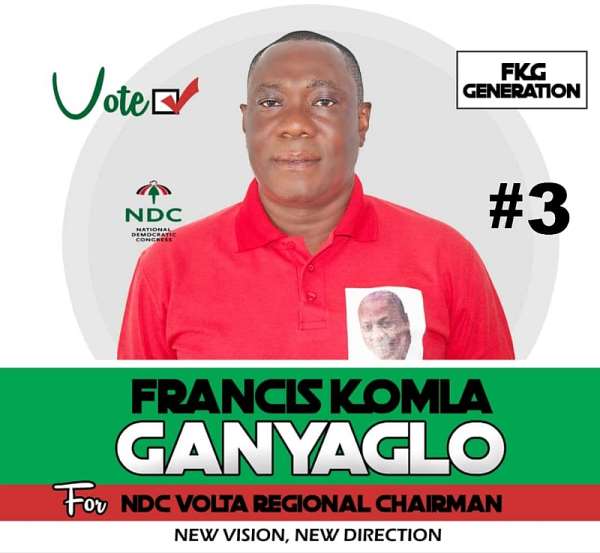 The opposition National Democratic Congress (NDC) was hit by a voter apathy in its 'world bank', the Volta Region during the 2016 general elections, a major factor that contributed to its massive defeat.

But the Aspiring Regional Chairman of the party in the Volta Region, Hon. Francis Komla Ganyaglo has vowed to eliminate the apathy among voters in the region come 2020 if given the knot.

Hon. Ganyaglo who played major part in 2008 for NDC to recapture political power from the NPP, addressing some delegates in the area, said NDC will not have a bumper harvest of votes for victory 2020 if apathy among the party members and voters within the region is not addressed.

The Aspirant noted that the apathy among voters in the region and other parts of the country was a result of the promises the NDC made regards developmental projects which were not fulfilled.

He assured delegates that as a grassroot man, he had been exposed to numerous challenges in the region which when elected Chairman, will collaborate with Constituency and Branch Executives to come out with strategies and messages backed by research to rebuild the trust in the youth.

Hon Ganyaglo further assured delegates that, when elected, his administration would not necessarily depend on national for logistics but rather lead the constituencies to mobilise funds through internal party activities in order to rejuvenate the party in the region and grassroot before campaign begins.

Also, he promised the executives that, his administration will institute a welfare scheme in various constituencies to give life support to party members.

He stressed that he will together with other regional executives and other individuals design strategies to restore the core values of NDC in the region to make it attractive again.

He said that his administration in collaboration with Regional, Constituency and branch Youth and Women Wings would organize youth clinic to train and equip the youth with leadership skills and assign roles within the party.

He explained that, his leadership would not only remain at regional level but would work with Constituency executives to reach the grassroot level of the party for massive victory in 2020.

Hon Ganyaglo called on the delegates to vote massively for him to become the Regional Chairman for massive development and above all, victory for NDC come 2020.