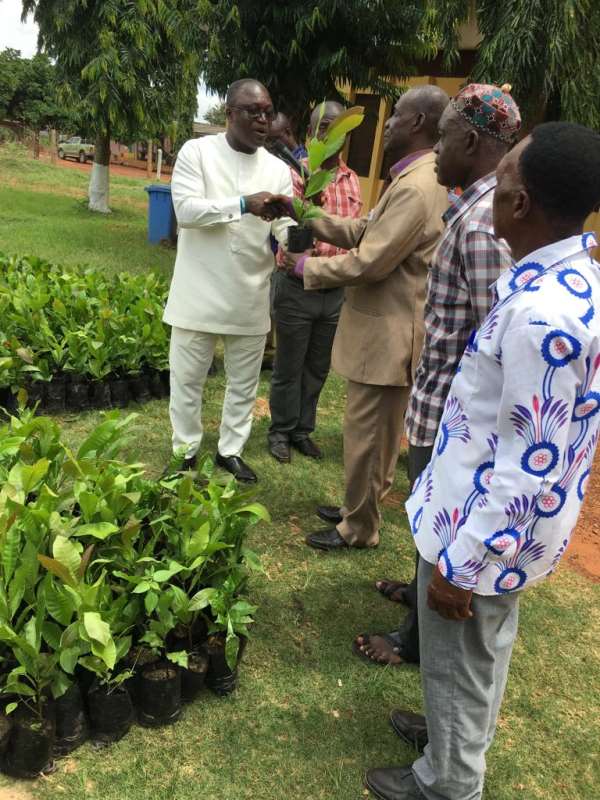 Hon. Donyina said, the Assembly has nursed enough poly-clonial cashew seedlings for farmers in the Municipality.

This initiative, according to him is in line with President Akufo-Addo's initiative of planting for food and jobs.

He made this assertion at the launching for free distribution of poly-clonial Cashew seedlings for 2019 season organized by the Assembly at the forecourt of Bronkyempem hall.

He further stated that Cashew farming is now a lucrative business in this country adding that, Government vision of planting for food and jobs is to provide money for farmers’ to enable them cater for their families.

The MCE urges farmers to plant and nurse more cashew trees because foreign donors from Canada have pledged to support the programme.

He appealed to farmers to adopt good farming practices by following the instructions of the Agric extension officers.

The Municipal Director of Agric Mr. Hudson Eric Asamani explained that the Agric Department had released more extension officers within the Municipality to help farmers in the planting of these poly-clonial seedlings.

He said this type is the improved variety, the yield is quality and it produces more healthy seeds than the local variety.

Mr. Asumani Hudson added that farmers who want to apply fertilizer to their poly-clonial cashew seedlings in order for it to yield more can do so.

He however stresses that the extension officers are ready to support farmers in the Municipality to meet their dreams.

He the fore advice farmers to adopt the irrigation farming methods to water their cashew plants in case the rain patterns fail them.

The Minister of state incharge of Agriculture Hon. Gyeile Nurah stated that Bono-East Region is one of the leading producers of cashew in the Country.

He explains that government will soon establish a development Authority that will manage cashew in this country to regulate the cashew sector for more benefits.

He thank all beneficiaries for taking part in the president’s initiatives that are geared towards ensuring farmers welfare in the country.

Mr. Kinsley Owusu Acheampong, Chairman of Cashew Growers Association in the Municipality appealed to government to increase the prices of cashew in the country.

The beneficiaries applauded government for the good initiative and pleaded for more support that will help farmers get enough money to cater for their families.