Politicians Don't Want Your Respect, They Want To Be Feared – Rawlings Booms At June 4 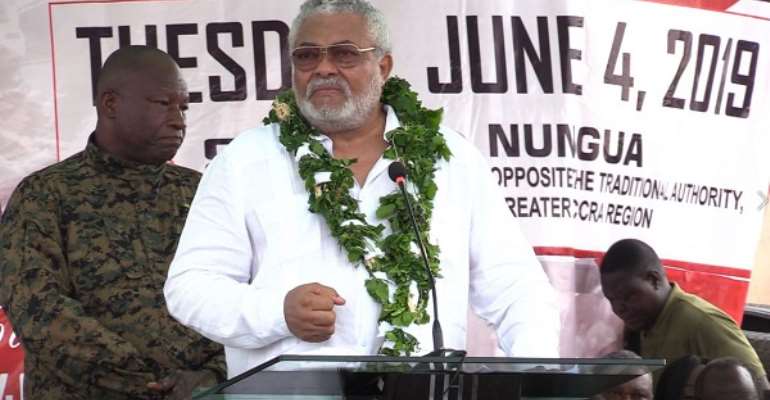 Former President of Ghana, Jerry John Rawlings in a typical fashion has described some government officials and leaders as bullies.

Delivering the keynote address at the June 4 parade at Nungua, the former president indicated that, some governments and some people in positions of authority or power do not care to be respected, to be loved, to be liked or admired; they simply want to be feared".

He continued, “Historically, humanity all over the world has faced revolts and revolutions, resulting in the public execution of the royal families in France and Russia for instance. The British royal family survived because the shock of what happened in France taught them a lesson some of us still have difficulties learning, about the basic fundamentals of freedom, justice, and democracy in governance. Humanity has always been defined by its freedom and justice. It is God-given”.

The former President Rawlings called for the urgent removal of Indemnity Clauses saying “there are many constitutional clauses that do not serve our interest. Over the years the indemnity clauses have emboldened certain characters to abuse their offices and profit themselves. It is quite evident that a lot of our people are losing confidence in our constitutional mandate”.

Below is the full text:

ADDRESS BY H.E. JERRY JOHN RAWLINGS AT A DURBAR TO COMMEMORATE THE 40TH ANNIVERSARY OF THE JUNE 4 UPRISING.

Cadres of the Revolution,

It’s been 40 long years since June 4th, 1979. Four decades ago, had the charge in the atmosphere been ignited anywhere between 12 midnight and 2 am, the explosion of June 4th would have happened on the early night of 15th May. In like manner, ladies and gentlemen had those who climbed into the seat of power three months later, learnt the lessons of the June 4th uprising, 31st December 1981 could have been avoided.

Right after the PNP government came into office, those in authority proceeded to devalue the essence of the uprising by luring AFRC members out of the country, forgetting that most of the genuine, unrewarded and unrecognized leaders were still on the ground. Although the majority of soldiers, servicemen, and students, we're still craving for freedom and justice, the intention of the authorities was to intimidate, harass, arrest and persecute some of them. The motive of these actions was to re-terrorize our people back into subordination and submissiveness; in short, to re-govern the people with the fear factor.

Instead of the then government taking up the challenge to lead a nation that was pumped up and ready to continue to rectify the rot, of the past, to defy any obstacle and to solidify the unity and purposefulness of our nation, the reverse is what occurred. This heightened the fever for June 4th.

Ladies and gentlemen, some governments and some people in positions of authority or power do not care to be respected, to be loved, to be liked or admired; they simply want to be feared. Fear cages healthy defiance and feeds corruption and authoritarianism. Fear for the sake of it exploited and abused degenerates into hatred if not held in check.

Historically, humanity all over the world has faced revolts and revolutions, resulting in the public execution of the royal families in France and Russia for instance. The British royal family survived because the shock of what happened in France taught them a lesson some of us still have difficulties learning, about the basic fundamentals of freedom, justice, and democracy in governance. Humanity has always been defined by its freedom and justice. It is God-given.

Ladies and gentlemen, when we throw our minds back to the recent image of the great and pious statesman, Pope Francis, going down on his knees to kiss the feet of warmongering ‘statesmen’, as a way of pleading with them to recognize and appreciate the value of life and the dignity of their own South Sudanese people, we are reminded about the abuse of power by so-called leaders and herdsmen all over. Comrade Ibn Chambas, could take a cue from his eminence and attempt kissing the feet of some of the Chokosies, the Konkombas, and his own Nanumbas, and appeal for peace.

Fellow countrymen, while we are thinking about how or what to do to ensure permanent peace amongst some of the warring factions or areas in our country, I would like to use this opportunity to remind our brothers in South Africa of the role we have all played in the past to bring about the change in that great country. Just as we were contributing to their liberation, the apartheid regime was also financing treacherous black Africans in our countries. The time has come for them to enhance the security of those who supported and stood by them in their struggle, by exposing the traitors who worked with Apartheid South Africa. These traitors ought to be exposed as they continue to treacherously parade themselves as patriots. It is not unheard of for certain African nationals to collaborate with western governments to rape their country of its resources. However, collaborating with an apartheid regime was not only unconscionable but extremely repulsive.

Ladies and gentlemen, a couple of months ago, my name was all over the news as one Alhaji Yusif reportedly forgave me for the demolishing of his hotel because he believed I thought he co-owned it with Sam Jonah and also that he was financing the opposition party. In the first place, he is in no position to forgive anyone or anything, not even the bush rat in his home town. God had nothing to do with unlawful structures; neither did he have anything to do with enforcing the law. Governments appear to exercise no restraint when it comes to breaking down poor people’s structures in waterways or unauthorized areas. Big people, however, seem to be above the law and are untouchable. If time were reversible, I would do it again and again and I will take along their new gargantuan structures in the waterways.

Incidentally, the structures were reported on by your respectable law-abiding neighbors who recognized the potential harm the building could cause. And to think that I am accused of ordering the demolition because I had a bone to pick with your Sam Jonah. Sam Jonah, by the way, is not unknown to have a treacherous and greedier appetite than your little hotel. I’m not sure the misuse of my name will win you any sympathy. Your financial claims and that granted by the court was overblown, but that’s how your kind mix business with politics.

Ladies and gentlemen, we have let the rot in our countries and our continent go on unchecked for so long. We have held our noses and watched some extremely terrible leaders subject our people to the worst of suffering, left them to slaughter each other based on ethnicity and religion, year in year out. This is not only peculiar to other nations; but to Ghana also, to the extent that we have by omissions or additions, allowed the rot to destroy the moral fabric of our society.

Ladies and gentlemen, there are many constitutional clauses that do not serve our interest. Over the years the indemnity clauses have emboldened certain characters to abuse their offices and profit themselves. It is quite evident that a lot of our people are losing confidence in our constitutional mandate. The constitution of the Fourth Republic was created by us, for us and to serve us, and in light of the 25 years, there is an unqualified need to reform or rewrite our current constitution. An urgent constituent assembly ought to be established with the necessary powers to rewrite the constitution. Their job would involve reviewing all the constitutional clauses especially the problematic ones, like the transitional provisions, indemnity clause, amongst others. This will ensure that everyone is equal before the law, encouraging transparency, accountability and responsible governance. The constituent assembly will hopefully embody the character of the Ghanaian people towards fashioning out a developmental agenda that is devoid of blind party allegiances and unscrupulous political promises. Our journey towards a developed nation rather ought to be an entrenched provision.

In line with our theme for this year, that is, “Developing a national character for sustainable good governance”, it’s about time our developmental conversation was one that included a forward sustainable goal aimed at future generations’ access to clean air, water, and environment. Our discipline of today guarantees our sustainability for tomorrow.

Our current sense of self-discipline is at its lowest ebb. Citizens do not feel responsible enough to keep their homes and communities clean. Many of us who lament about flooding during the rainy season are very guilty of the indiscretions that lead to the deadly floods. We dump refuse indiscriminately and wonder why drains choke. Some actually see the rains as an opportunity to dump refuse, believing the rainwater will sweep them away. If we continue this level of lawlessness, we are bound to face more serious flood disasters. The key to our development is a heightened self-discipline in our approach to our everyday life. Let us all do a thorough introspection and identify where we fall short because we all do fall short one way or the other.

Fellow comrades, I entreat you all to remember the discipline that emboldened us to execute June 4th and to replicate it on our roads, in our classrooms, and institutions. If we do not develop a national character for sustainable good governance, we would have failed this generation and especially generations yet to come. Is that the legacy we wish to bequeath the future?

Ladies and gentlemen, as I conclude, let me congratulate all Muslims for the successful conclusion of the period of Ramadan. Your 30-day period of fast is aimed at cleansing us of our sins and renewing our relationship with Allah. As you break your fast with the Eid ul Fitr festival, we all join you in giving thanks to Allah for his generous guidance and protection. Eid Mubarak to all our brothers and sisters.

Thank you and God bless you all.