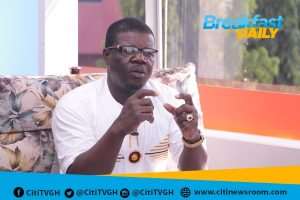 “It is the back pay that I am entitled to. It is not morning we are going to take somewhere to be given to me as if I am living office and am being patted at the back for a good job done. No! It is not anybody’s money. It is money I should have actually earned at a time I was holding office. In fact, when members are given this ex-gratia, they are put into an economic disadvantage because the value of the money depreciates over time.”

The National Democratic Congress (NDC) Member of Parliament (MP) for South Dayi in the Volta Region, Rockson Dafeamekpor, has justified calls for a welfare system for legislators after active service.

According to him, people misunderstand what the ex-gratia entails.

Despite the payment of ex-gratia which runs into thousands of cedis after every four years, the Speaker of Parliament, Prof. Mike Oquaye, has charged the House Committee of Parliament to take steps to implement a pension scheme for MPs to cushion them during retirement.

The call which has received mixed reactions from a section of the public and relevant stakeholders.

But the South Dayi legislator has told Citi News, the provision of an ex-gratia other than the welfare package that is being considered will put deprive them of the economic value of such monies.

According to the Speaker, the living conditions of most former MPs are a far cry from the public perception that there is a lot of money to be made in Parliament.

“We all know that the lives of many former members are not as we will like to see it and it pains me personally to see how they look like after they have served and people think these are people who are making money …It is painful. People do not have money here.”

He has thus tasked the House committee and the Whips to come up with recommendations on how best to deal with the situation.

“See other Members of Parliament who have left office recently or not long ago and we must also, therefore, look at the reality and make provision for pensions and other aspects of welfare of members. So I refer this to the committee to look at it.”

A group of former legislators have called on Parliament to come to their aid through the provision of pension schemes and welfare packages.

The former MPs said their current living conditions are bad.

They urged Parliament to also provide them with better retirement packages since most of them have remained jobless after exiting the legislature.

They called for a pension scheme for sitting MPs and an extension to former MPs.