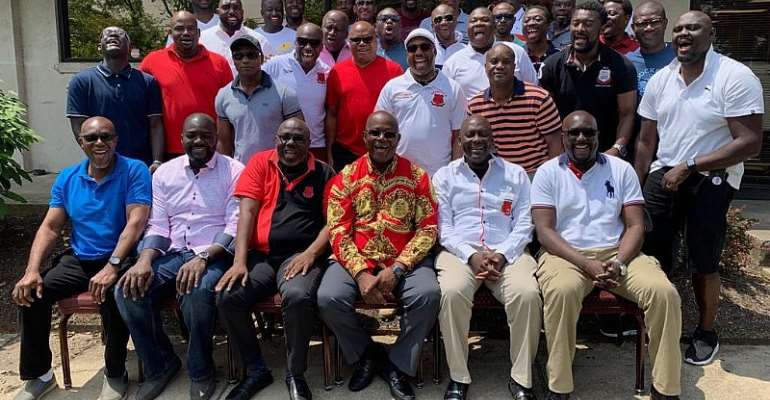 When a group of old boys of Mfantsipim School domiciled in the United States (MOBA-USA) gathers for the third year running to raise funds for their school, over $50,000 in cash becomes an achievable amount geared towards their projected $100,000 MOBA-USA endowment fund. Martins Crosswinds in Greenbelt again hosted the fundraiser in the State of Maryland.

Over this past Memorial Day weekend holiday in the US an additional $18,000 in cash was realized and added to the $6000 raised in 2017 and the $29,000 in cash raised in 2018 respectively to arrive at $53,000 US dollars total cash today as revealed by a Source close to MOBA-USA to TheAfricanDream.net.

Pratt Abrokwa, President of MOBA-USA in his address during the fundraiser dinner maintained that the main emphasis was “the generation of support for the MOBA-USA Endowment Fund, Educational Development Workshops for both teachers and students, E-Learning Launch, and the establishment of an IT Hub at Mfantsipim, courtesy of Abdul Rashid of DRW.com.” This event was themed ‘E-learning launch at Mfantsipim School, a game changer in second cycle institutions.‘

Mr. Abrokwa also stated that MOBA-USA is pursuing avenues to establish bilateral relationships between Mfantsipim School and colleges in the US, stressing that “we are also seeking avenues to establish relationships between Mfantsipim old boys at various universities in Ghana, and with universities in the United States.” In his closing remarks, the president earnestly asked all who made pledges totaling over $100,000 over the years to redeem to add to the endowment fund.

Kodwo Ghartey-Tagoe, JD, State president of Duke Energy in South Carolina who was Chairman of the event said contributing to the MOBA-USA endowment fund will enable the school to maintain its high-quality brand by allowing “the school to continue to provide the top quality products that serve not only our home nation Ghana, but the world…”

There are over 60 classrooms, science labs, and workshops that need to be equipped with the necessary materials to render them functional for students use. An estimated amount of $100,000 is needed to carry out these projects according to Speaker Dr. Kwasi A. Debra (MBA). “Approximately 100,000 will be required for a full rollout” and development of the Mfantsipim e-learning project, for instance,” said Dr. Debra.

Below is a video snippet from the night.

Gracing the night as a very special guest was Ghana’s Ambassador to the US, His Excellency Dr. Barfour Adjei-Barwuah. The Ambassador asked all in attendance to support the school because “the school made you what you are today, at least it gave you the basis and taught you to learn to love to learn,” he appealed to all old Mfantsipim boys who are now on their feet to continue to develop the world and “hold your country up.”

On the sideline of the fundraiser dinner was a raffle for the night and the winner took home an Ethiopian Airlines US-Africa ticket. The lucky winner was Dr. Kwesi Kyei Darkwah. The previous day before the dinner was a mingle and networking bash at Sign of the Whale, DC on May 24. May 26 witnessed the inaugural MOBA-USA Intercollegiate Memorial Day Reunion. It was all fun and games that featured elite Ghanaian schools like Adisadel College and Saint Augustines.

Ghanaian celebrity actress and humanitarian Joselyn Dumas, was present to co-host the fundraiser with the host for three years in a row Dr. Yaw Berko. Music was provided by DJ Fisho based in the Washington DC area. Visit mobausa.org to connect with, contribute, and find out more about this nonprofit alumni.