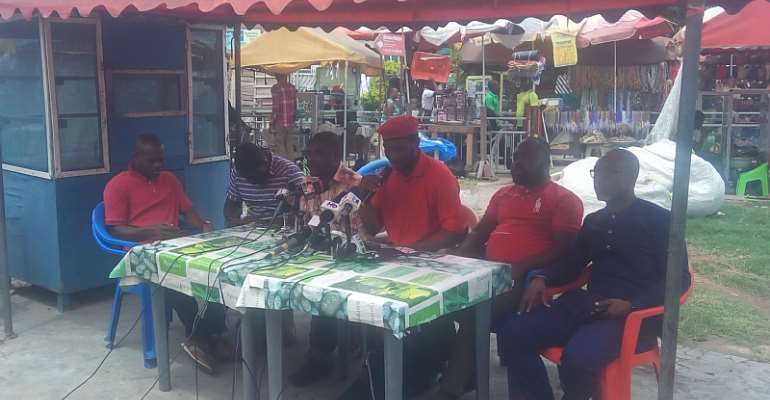 At a media briefing held at the Rawlings Park in Accra Central, the group's convenor Mr. Bernard Monarh accused the two security capos of the insecurity in the country.

According to him, the conducts of both security bosses have become a major concern for many Ghanaians.

Mr Monarch who is the National Chairman for People's National Convention (PNC) described COP Tiwaa as a government conduit for needles political persecution of opponents of President Akufo-Addo's administration for political expediency.

He said the recent invitation of the NDC Chairman Ofosu Ampofo by the CID boss was so vexatious and needless compared to the NPPs Hon Kennedy Agyapong who is walking freely despite being cited for instigating comments that led to the death of the late Ahmed Hussein Suale, an investigative journalist with Tiger P.I.

He said the CID boss herself is a walking candidate for investigation in the famous A-Plus tape which she claimed was doctored but find it necessary to swiftly arraigned Mr Ofosu Ampofo before court on a similar alleged doctored audio tape.

"Ghana is in a state of insecurity because there is high rate of market women being robbed, girls are being rapped whilst men are being killed by contract killers. Party militia robbed and state regalia are visiting mayhem on innocent Ghanaians, " he started.

He continued, "Whilst we are yet to recover from the mayhem perpetrated by the state sponsored men in National Security regalia at Ayawaso bye election.

"It makes it more scarier to note that the CID and BNI looks on unconcern and unable to nip this canker in the bud. Over twenty three innocent citizens were shot at the resident of Kwesi Brempong the Ayawaso West wougon NDC Parliament candidate.

"We wish to sound a caution to COP Tiwaa and militia infested police that any attempt to arrest Ofosu Ampofo will be treated as an attack on opponents of government and will be resisted by the progressive forces and well meaning Ghanaians.

"We are hereby demanding the resignation of COP Asante Appeatu for failure to arrest and prosecute those captured in video assaulting Hon Samuel George MP for Ningo Prampram by men in Police branded and uniform after five months of the infamous incident," charged Mr. Monarh

Present at the Press briefing include Mr Peter Otukunor, Deputy General Secretary of NDC, Mohammed and Dawudu all from PNC.

Others include Hassan Ayariga of APC ,Kobby Barlon of NDC, representative of Egle Party, Desmond Ntow National Organiser of PNC.