Tempers High As Egypt Christian Women Told To Cover Up 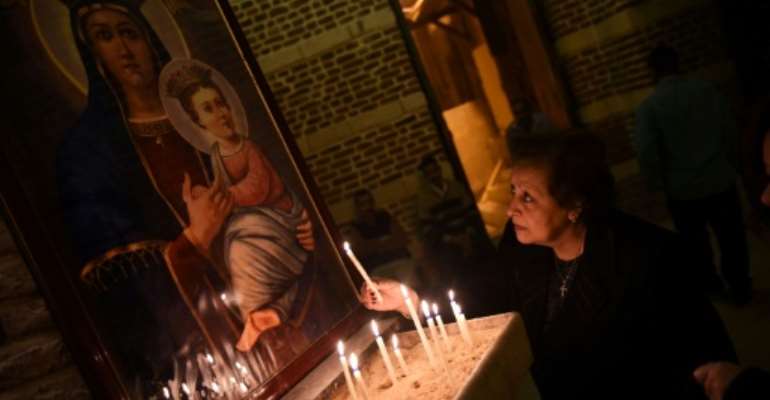 Coptic Christians make up around 12 percent of Egypt'sÂ population of 100 million. By MOHAMED EL-SHAHED (AFP/File)

A Coptic priest's comments about women's clothing being too revealing in churches has sparked a heated debate this week among Egyptian Christians, the largest religious minority in the Middle East.

"Why are girls and women even coming to church if they're wearing revealing and inappropriate clothes?" he said in a widely-shared video.

"She who does, will be judged," he added. "I personally think any man, who agrees to his wife leaving her home in that way, will be judged before God."

Lamei made the comments in an April 30 sermon marking Orthodox Easter, which is celebrated by Egypt's Coptic Christian community.

"At least during Christmas we don't have to worry about racy clothes because it's cold... we want it to be cold always," joked the popular priest.

Coptic Christians make up around 12 percent of the conservative country's population of 100 million, which is predominantly Sunni Muslim.

Lamei's remarks sparked a mixed response from women in Egypt, with some criticising his stringent tone while others praised the priest for giving worshippers guidelines. 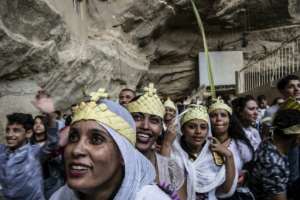 "He is condemning these women... instead of explaining the appropriate dress code and attitude in church in general -- for everyone," said Sandra Awad, a 22-year-old student who has attended Lamei's church in the past.

But another woman, writing on Facebook, said the priest "spoke with complete respect... so they can wake up and revere the church they're entering."

The debate comes in the wake of a controversial online campaign calling on Christian women to "cover up, so we people can pray".

A parallel drive urging Egyptian women to cover up for Ramadan, the Muslim holy month, also appeared this week with users drawing similarities between the two in the sexist language employed.

Lamei has denied on social media that he endorsed any online drives and did not respond to AFP's requests for comment.

St Mark's Church in the Heliopolis district, where he delivered the sermon, on May 6 published a link on its Facebook page to the full Easter speech.

The Coptic Church has become increasingly political under the leadership of Pope Tawadros II, an enthusiastic supporter of President Abdel Fattah al-Sisi.

It has also taken on a more active role as the sole representative for Copts in public life as a discriminated minority.

"The clergy are role models for the community who see them as the guardians of their community, its traditions and its faith," said Elizabeth Monier, an expert on Coptic affairs at the University of Cambridge.

"This is strongly the case when a community feels that it is under threat," she told AFP. 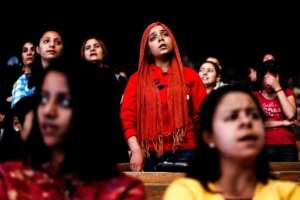 Egyptian authorities routinely turn a blind eye to sectarian violence involving forced evictions or the shutting down of churches. By GIANLUIGI GUERCIA (AFP/File)

The Coptic community has suffered a number of deadly attacks on its churches in recent years, while Egyptian authorities routinely turn a blind eye to sectarian violence involving forced evictions or the shutting down of churches.

"Perceived attacks on Coptic traditions or teachings are likely to lead Copts to rally around their clergy and uphold traditions more strongly," said Monier.

A group of worshippers at a church in Upper Egypt started an online campaign last week urging fellow young women to dress modestly, which was vehemently criticised by Facebook users for its conservative language.

Marianne Sedhom, 28, a lawyer in Alexandria who took issue with Lamei's sermon, told AFP "women in the church need to speak up more against retrograde and male-centric ideas".

Egypt is one of the worst offenders worldwide for sexual harassment -- endured by more than 99 percent of women in the county according to a 2013 United Nations report.

The priest's remarks were dubbed "Christian Salafism" by Ishak Ibrahim, a researcher with the Egyptian Initiative for Personal Rights, in reference to the dogmatic school of Sunni Islam.

Ibrahim regarded such rhetoric as hardening attitudes that "justify harassment" towards women.

"There's a crisis in clerical education so clergy end up tying piety to modesty," he said.