The Drones Are Here; Where Are The Nkonfem? 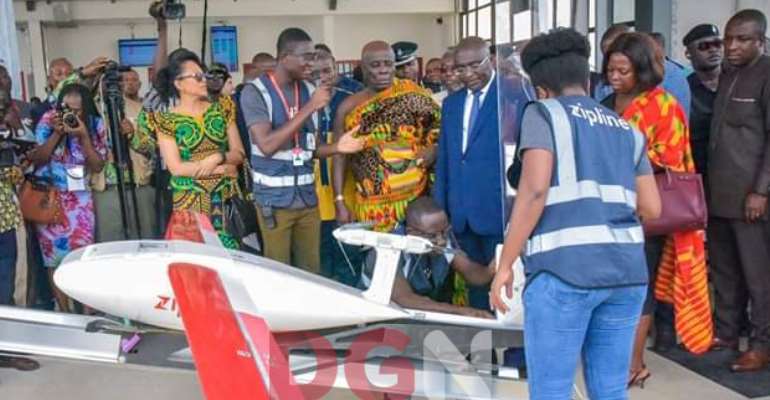 Great minds, they say, think alike. I had already chosen the heading for today’s piece when I chanced upon a cartoon on Facebook by 3News.com with the same heading. I have no difficulty crediting the media outlet for inspiring the choice of today’s heading. Unlike some folks from the Minority, some of us do not believe in literary theft, otherwise known as plagiarism.

There is this Akan proverb that loosely translates, “It is only a liar who says his witness has travelled abroad. But the one saying the truth always has his witness readily available to corroborate his story.” How profoundly true!

When the Nana Dee government first hinted of flying blood and other essential medicines using drones, many were those who grumbled. As was expected, those under the eagle-headed Umbrella grumbled the most. They concocted all manner of stories to court disaffection for the project.

Ha, ha, ha! Wondering why the laughter? The funniest of them all was the Kwaku Ananse story by the Zu-za National Women’s Organizer that the drones would be used to take naked pictures of women in open bathrooms. But the blatant lie could not generate the needed effect as it was effectively neutralized by the Health Ministry.

I also remember how a lame criticism of the project elicited a befitting response from Dr Mahamudu Bawumia. Dr Bawumia cheekily told President Ogwanfunu that flying blood and other essential medicines on drones would always be preferred to flying guinea fowls “nkonfem”. I needn’t recount the “akonfem” debacle because it is a story known by all and sundry.

Few months later, the first centre from where blood and other essential medicines and vaccines will be distributed by unmanned aerial vehicles (drones) to health facilities has been inaugurated. Known as the 'Fly to Save a Life Project', the initiative will fly special purpose drones from the Omenako centre to distribute essential medical supplies to health facilities in the Eastern Region, parts of the Ashanti and Volta regions as well as the entire Afram Plains.

Constructed and operated by the San Francisco-based drones manufacturer and logistics services provider – Zipline – the new service will make emergency delivery of 150 different vaccines, blood products and life-saving medications on demand. Three more centres will be constructed at strategic locations in the country.

Being the largest medical drone delivery service in the world, the ‘Fly to Save a Life Project’ has attracted international attention. It was heartwarming to see my homeland receiving positive reviews on the international media. It was even more heartwarming hearing stories of how the project had already started saving lives.

So I ask: “Now that the drones are here, where are the guinea fowls that flew to neighbouring Burkina Faso?” We will continue to remind President Ogwanfunu that many of his compatriots will not dance to his 'pito' music.

For sure, we cannot dance to President Ogwanfunu's 'pito' music, when we know his return to the presidency will lead this country into the abyss. We cannot dance to his 'pito' music because we do not want to relive the era of inflated projects and the lining of pockets of public officials and their accomplices. We refuse to sing his 'pito' music because we cannot endorse a president who sits on the fence as the country is being milked dry. We are not ready for another SUBAH saga, GYEEDAH debacle, “Akonfem” palaver, phantom tree planting exercise, sad SADA story and a messy bus branding deal.

It is obvious that the only people against the use of technology in the area of health delivery are our Zu-za friends, even if it is going to save many lives. For them, if it is not create, loot and share, then the project must be opposed. Does such a group mean well for this country?

While we pray for a glitch-free operation of the Zipline project, we shall also continue to remind one another not to be too comfortable to forget the corrupt era of the Dead-Goat.