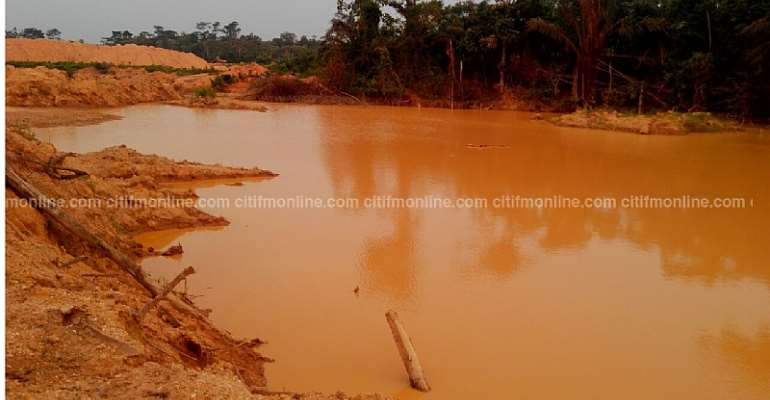 She is not the first to make a profound public statement about the plastic waste problem in the country; but hers is clearly a genuine clarion call, because First Lady Rebecca Akufo-Addo has since the swearing-in of her husband, President Addo Dankwa Akufo-Addo, made healthcare and environmental-protection issues her overriding policy concern (See “If We Don’t Act Fast, Our Future Will Be Jeopardized By Plastic Waste – First Lady” Modernghana.com 4/18/19). She is also right to a considerable extent that the advent of sachet water or water packaged and sold in soft gel-like plastic sacs or bags has contributed immensely towards the huge mountains of inorganic waste that litter communities and environments all over the country, especially in our urban areas. But it is equally true, perhaps even more so, that the wanton degradation of the environment by Changfang Excavator-Driven Galamsey, or illegal mining, has primarily been the cause of the massive explosion of sachet water in the country.

Now, I don’t know what the regulations bordering on the collection of plastic waste in the country are like in Ghana, but maybe our water-bottling companies, many of which are multinational corporate entities, by the way, may want to borrow a page or two from how this is done here in the United States of America, whereby anywhere from five to twenty cents, depending on the individual states involved, is imposed as tax on every bottle of water purchased at either the supermarkets or mini-grocery stores around the United States. What this means is that a 40-bottle crate or carton of Poland Spring Water or any other brand of bottled water and/or soft drinks attracts $2.00 in the form of a tax levy, the return of which empty bottles earns the buyer back his/her surcharge. At several supermarket chains and department stores are conveniently located special bottle-crushing and shredding machines into which these empty bottles are deposited.

The depositor receives a receipt from the bottle-crushing machine whose stated value s/he redeems at either the cash register, in the form of rebates or discounts on purchases, or at a receipt-redemption counter established for the purpose, often at such nation-wide supermarket chains as Wal-Mart, BJ’s and Costco. If such a system, in one form or another, is not already in place in the country, then maybe the relevant authorities may want to promptly consider setting up a similar quite efficient plastic-waste recycling system in the country. I, however, don’t see any other alternative for the sachet-water type of soft plastic pouches/sacs, other than to have them completely banned, as they can also easily become death traps to our infants and toddlers. Here in the United States, other than soft-plastic bags of ice-blocks or ice-packs, as they are popularly known, one does not commonly come across sachet water of the kind that is commonly and routinely sold in public places, such as at lorry parks or in bus terminals in Ghana. But I am quite certain that these soft-plastic bags are recycled somewhere; I just haven’t come across any machines manufactured for the purpose of shredding these soft plastic bags.

So, perhaps, the best way of recycling these soft-plastic or polymer materials and products is that which has been suggested by the First Lady, whereby the various factories that manufacture these soft-plastic sacs set up special locations in cities, towns and villages whereby specially designed or designated trucks pick them up at regular temporal intervals. The take-back system suggested by the authorities of the country’s Environmental Protection Agency (EPA), which is similar to the foregoing proposal, may be equally effective. Indeed, even as Mrs. Akufo-Addo poignantly and urgently notes, the threat of plastic waste is increasingly becoming a global hazard. We are also reliably informed by the EPA, for example, that if no globally concerted efforts are made to drastically reduce the volume of plastic waste, by the year 2050, which is not very far off, the world’s oceans will be filled with more plastic waste than fish.

Recently, for instance, a whale was reported to have been washed ashore somewhere whose giant stomach was reported to contain about twenty or forty pounds of plastic waste. Now, that is something to seriously think about. What this means is that an acute shortage of sea food, so-called, is fast becoming a reality. As well, there is an exponential increase in the amount or percentage of poisoned or contaminated sea food, which means an increasing health hazard for avid consumers of sea food, which is most humans around the globe.