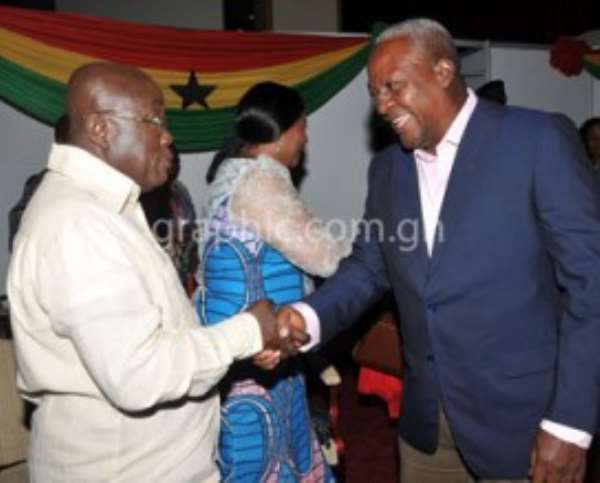 I have said before and hereby repeat the same: Any Ghanaian who thinks and believes that former President John Dramani Mahama deserves to be afforded a second shot at the Presidency must be living in a Fool’s Paradise (See “Mahama Hints at Changes to Free SHS within First 3 Months of Next Presidency” 3News.com/Ghanaweb.com 4/12/19). First of all, we need to review the quality of the Mills-Mahama government’s education policy of which the former self-proclaimed Atta-Mills’ “Spare-Tire” served three-and-half years as Vice-President or Second-in-Command; and then the next four-and-half years that the former National Democratic Congress’ Member of Parliament for Gonja-West, in the newly created Savannah Region, served as substantive President and fatigues- or camouflage-wearing Commander-in-Chief of the Ghana Armed Forces.

Under the tandem Mills-Mahama Presidency, not only did the duo produce more illiterate youthful Ghanaian citizens and thus a whole generation of unemployable pool of potential thugs and criminal vigilantes; it was also during this most shameful period in Ghana’s postcolonial history that the United Nations-sponsored and Paris-based Organization of Economic Cooperation and Development (OECD) ranked Ghana’s public high school system butt-naked last among some 145 countries evaluatively surveyed. Put into simple English, Ghana ranked 145 out of 145 countries surveyed around the globe. Among the Akan-majority population of this country, our elders and sages have a proverb that runs as follows: “If Mr./Ms. Naked promises you a bolt of cloth, you just listen to his/her name.”

In short, even a casual survey of the education policy of the Mahama-led government of the National Democratic Congress (NDC) inescapably indicates that the former Rawlings’ Communication Minister is a hard-nosed elitist who thinks that it is only selfish and megalomaniacal upper-class Ghanaian citizens like himself who have an inalienable right of free and unfettered access to universal public and private basic education. Which is why whenever the debate on a fee-free public Senior High School (SHS) system has come up for national discussion, going back to at least 2007, Mr. Mahama, then the running-mate of the late President John Evans Atta-Mills, has invariably insisted that it could not be done because the country did not have adequate financial and capital resources to implement this most democratic, healthy and equitable system of basic skills acquisition. He rather preferred a gradualist system, whereby only the rich and most powerful Ghanaians got the first draw, as it were, while the rest of us lumpen-poor bona fide Ghanaian citizens waited on the line till Thy Kingdom come.

We have also witnessed precisely what former President Mahama means, when he declares that in the highly unlikely event of him being elected President for a second time, he intends to review the currently unfettered fee-free access into the country’s public Senior High School System. Indeed, when as President, Mr. Mahama had the prime opportunity to implement a fee-free universal access to K-through-12 compulsory education policy initiative, the so-called Great Communicator and Authoritative Historian decided to rather bizarrely supply female middle- and high-school pupils/students with Tampons or sanitary pads, while their male classmates and peers got supplied with condoms or prophylactics. About the next to the progressive education policy initiative aimed at improving the country’s standard of education that the then-President Mahama implemented was the free supply of cheap one-size-fits-all school uniforms.

Later on, Mr. Mahama would distribute foot-ware to a few strategically selected public schools. In other words, Mr. Mahama supplied our public schoolchildren and grandchildren with just about everything but learning and teaching materials. So, just what is this Kanazoe Ford Expedition Payola Scam-Artist talking about, but the total academic disenfranchisement of our children and grandchildren, the very future leaders of the Democratic Republic of Ghana?