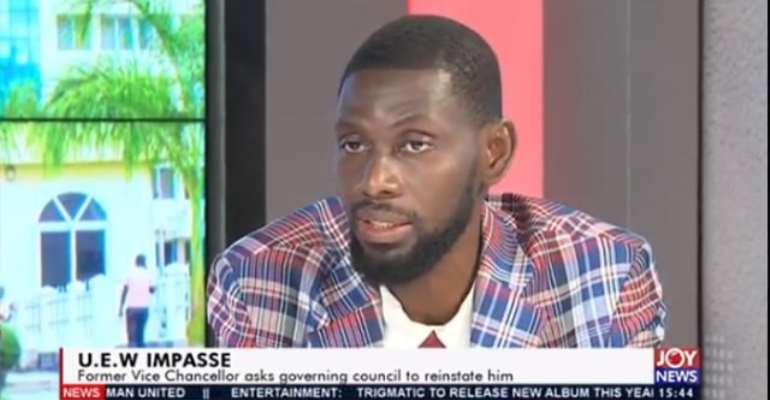 Prof Avoke wants to be reinstated as Vice Chancellor of UEW but Council say never.

At a press encounter on Tuesday, Prof. Avoke requested UEW to a llow him to complete his unexpired term – he had six months to the end of his tenure before he was sacked for alleged breaches.

“All the allegations made against us have been proven to be untrue especially by the EOCO, a state organisation that investigated the said allegations,” he told reporters in Accra.

The Governing Council of the University Education, Winneba in August 2018 dismissed Professor Avoke and four other principal officers of the university after the fact-finding committee found them guilty of procurement infractions.

The said irregularities had to do with monies paid to contractors who were working on the North Campus roads.

This position by Prof Avoke has been reinforced by the findings of a leaked report by EOCO which looked into the matter.

The anti-graft agency found among other things, that Prof Avoke did not abuse his office, neither did he breach any procurement laws as alleged.

“The injustice in dismissing staff who have served the university over the past several years, on trumped up charges, evidenced in the so-called Fact Finding Report is probably the greatest injustice in the history of higher education anywhere in the civilized world,” Prof Avoke said.

The University of Education, Winneba has persistently been in the news since last year as a fight for management of the university intensified.

On March 14, 2019, the Central Regional Security Council closed it down following a violent student demonstration.

The demonstration was occasioned by a decision of the Governing Council on March 7, 2019, to institute disciplinary actions against three lecturers after what it claimed were adverse findings against them.

This led the minority in Parliament to wade in, calling for the removal of the Council Chairman and Vice Chancellor of the University, blaming them for the woes of the university.

The statement, issued Friday, said Vice Chancellor, Prof. Anthony Afful- Broni and the Council Chair, Associate Prof. Emmanuel Nicholas Abakah had not only failed to manage the University but their present positions remained the greatest obstacle to the resolution of the UEW impasse.

Subsequently, the Council reversed its position, reinstating the three lecturers.

On Prof Avoke however, UEW says its decision stands.

“UEW never made a formal complaint to EOCO. As it stands now we haven’t even sighted a copy of the report. I don’t know of any law that invalidates a committee’s report because EOCO has come out with a different report,” he said.