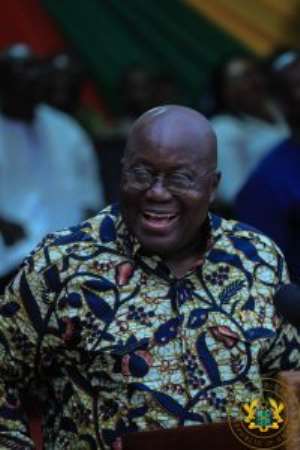 The Chief of Sefwi Wiawso Traditional Area, Katakyie Kwasi Bumangama II, has described President Akufo-Addo, as a courageous leader who has kept his promises to the people of the Western North Region.

According to the Sefwi Wiawso Chief, for 44 years, the chiefs and residents in the Western North area had been advocating for a region of their own without success.

“When you (President Akufo-Addo) came to Sefwi Wiawso in 2016, we put this same request before you. In fact, our inability to get an immediate response from you then made us think that you would not heed to our request. It was until you got to Sefwi Bodi, that you indicated that if we voted for you, you will ensure that our request for the Western North region is granted,” Katakyie Kwasi Bumangama II said.

He continued, “many were those who did not believe in you, but you have proven to us that you are Ɔseadeɛyɔ (promise keeper). You are a courageous leader. There aren't enough words to describe what you have done for us.”

The Sefwi Wiawso Paramount Chief said this on Wednesday, April 10, 2019, when President Akufo-Addo visited Sefwi Wiawso, at the beginning his 2-day working visit to the Western North Region.

With five more regions created, in addition to Western North, Katakyie Kwasi Bumangama II told Nana Addo: “you are a courageous man. We are grateful. And we want to let you know that, we will never turn our backs on you. We will forever remember what you have done for us.”

The Sefwi Wiawso Chief also thanked President Akufo-Addo for the $20 million seed fund given to the Western North Region to enable its smooth take off.

“That is why we need not put undue pressure on you. We need to allow you to carefully nurture our region for us. Because you gave us the region, you can best develop it for us. All that is required, we know you will provide,” the Chief told President Akufo-Addo.

The President was praised for appointing a substantive Minister and Deputy Minister for the Western North Region from the area.

“In fact, we had presumed that it will delay, but, due to your ever-prepared disposition, you announced their appointment soon enough for us. You have appointed our most preferred candidate. On Aboagye-Gyedu, Mr. President, I know little of, but the Anhwiasomanhene can vouch for him. But Alex Tetteh (Deputy Western North Region Minister) is a man after my own heart,” he added.