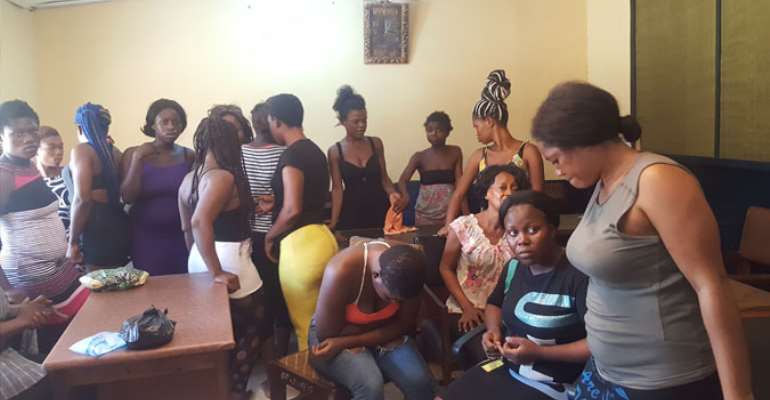 Some of the 'prostitutes' at the Kaneshie police station

About 19 women, including five Nigerians suspected to be commercial sex workers, have been arrested by the Kaneshie Police in Accra.

Most of the suspects aged between 18 and 55 were picked up in a brothel near Avenor, in Accra while others were soliciting sex from customers on the streets.

A man who claimed to be 32-years-old was also caught having sexual intercourse in the brothel with one of the supposed sex workers.

Regina Dankwa, 55, who was arrested by the police, said she has been in the 'business' for the past decade.

According to her, she engages prostitution only at night and uses the funds to take care of her grandchildren.

“I have sacrificed to do this business to take care of my grandchild, since this is not a good business that I will allow my only daughter to engage in,” she explained.

Ms Dankwa added that she charges between GH¢30 and GH¢60 because she offers 'extra services' to clients.

Another suspect, who gave her name as Jessica Awuni, claimed her husband introduced her to prostitution.

“Every evening, my husband takes care of our child while I also go and solicit sex for money and I have been doing this business for months now,” she said.

The police also apprehended a woman identified as Fati Awudu, who is three months pregnant, at the location.

All the suspects are in the custody of the Kaneshie Police awaiting a court date.

Superintendent Ernest Acheampong, the Kaneshie District Police Commander, told DAILY GUIDE that the suspects were arrested in a swoop conducted on Wednesday dawn.

He said suspected sex workers operating in the area pose security threat to travellers and passersby at night.

“Drug peddlers and weed smokers have taken advantage of the presence of the prostitutes to operate in the area. We have received several complaints of assaults from victims who use that stretch of the road,” the police chief added.