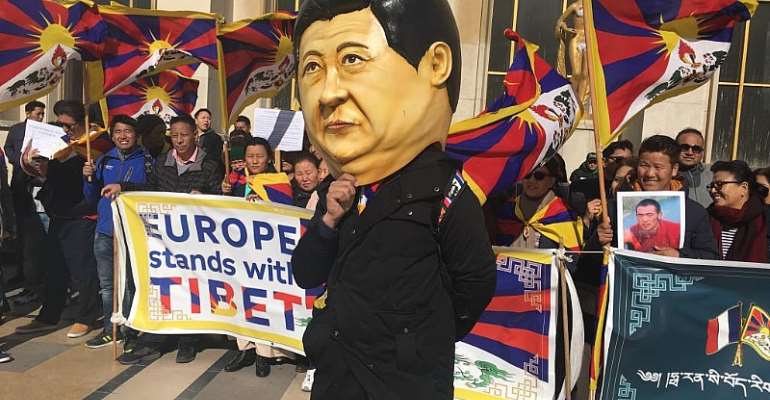 Several hundred Uighurs, Tibetans and other Chinese minorities gathered in Paris on Monday to urge French President Emmanuel Macron would raise their issues as he welcomes his Chinese counterpart for an official visit.

As Macron prepared to welcome Xi in the French capital, members of the Uighur and Tibetan diaspora gathered on a windy Place de Trocadéro, across the Seine River from the Eiffel Tower.

They called on Macron to address China's human rights record during Xi's official visit, arguing that Paris has the responsibility to pressure Beijing on such issues as the two countries seek to strengthen strategic ties.

Tibetans and their supporters held flags and called on France to play a role in opening new talks between Beijing and the exiled Tibetan leader, the Dalai Lama, which have stalled since 2010.

“We're asking the French president to encourage China's president to engage on the resumption of the peace talks on the future of the Tibetan people,” said Charles Thupten Gyatso, an activist with France's Tibetan community.

Tibetans also joined other minority groups as well as French human rights NGOs in urging Macron to seek meaningful gestures on prisoners of conscience and conditions of detention.

“[We want] to put an end to the mass arrests of Tibetans, Uighurs, Chinese Christians, spiritual practitioners of the Falun Gong and Chinese democratic dissidents,” Gyatso said.

Rights groups also accuse China of abuses against Uighurs, Kazaks and other mostly Muslim minorities in the west of the country, who they say are subject to mass detention, surveillance, political indoctrination and forced cultural assimilation.

“As the Chinese government visits France, we want President Macron to say we want justice and freedom for three million Uighurs in concentration camps,” says Raziye Maerdan, a Uighur living in France.

Activists also criticised censorship on the 30th anniversary of the military crackdown at Tiananmen Square in Beijing, which monitors say is virtually absent from the web in China.