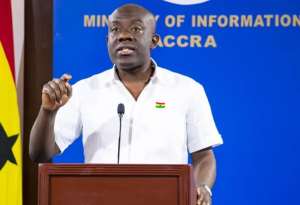 President Akufo-Addo's administration has pledged to underwrite the medical costs of victims of recent accidents in the Bono East and Central Regions.

It has also reiterated its commiserations to victims and families of the two accidents that reportedly left more than 60 persons dead.

About 55 persons were confirmed dead, and 30 injured. A total of 35 out of the 55 who died were burnt beyond recognition and were given mass burial at Jema on Saturday, March 23, 2019.

President Akufo-Addo immediately on Friday, commiserated with the victims and their families and challenged the Police council which is seized with the power to regulate road traffic, to speedily implement the recommendations of the inter-ministerial committee set up last year to propose ways to deal with carnage on our roads.

And announcing Government's intention to underwrite the medical bills of the victims to journalists on Sunday, March 24, in Accra, Information Minister, Kojo Oppong Nkrumah, said “reducing road accidents in the country is a major priority for government.”

He stated that “it is the reason why agencies like the National Road Safety Commission and the Police MTTD continue to receive support from central government to address road safety issues and also to tackle the major factors that contribute to road accidents in the country.”

According to the Minister, “Government is also reviewing the road traffic regulations to address some implementation challenges as well as incorporate innovations in the management of road transport services.”

He urged that “we must also scale up road safety education and sensitization to ensure compliance to road safety measures, procedures, and policies.”

Meanwhile, official data shows that from January 2019 to February 2019, 411 persons have lost their lives through road accidents, with 2,048 injuries.

The Road Safety Commission announced to journalists at the Information Ministry that steps were being taken to address the carnages.