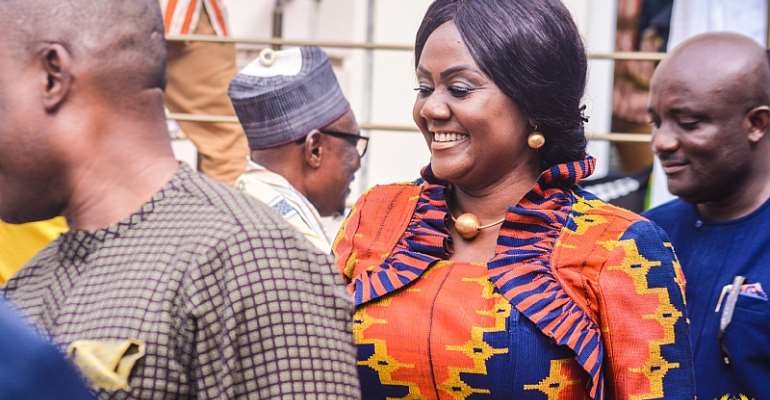 Hon. Lawyer Mrs. Barbara Oteng-Gyasi, Minister of Tourism, culture and creative arts designate, on Friday, 15th March, 2019 went through Parliamentary Appointment Committee Vetting as required by the Constitution of Ghana prior to being appointed as a Minister of State.

The Minister designates who is also the Member of Parliament for Prestea/Huni-valley constituency answered questions and expressed her thoughts relating to her Curriculum Vitae, life experiences, issues bothering on several aspects of Tourism in Ghana as well as her plans and programmes to transform the industry when given the nod.

She pointed that, the creative arts which was brought under the tourism ministry feels neglected because the focus has been on tourism and that she has become aware of their dissatisfaction, “I will pay great attention to the creative arts sector, I will see them as my last born because they were added to the ministry later and therefore they deserve the necessary attention to drive , when I get to office I will engage them and get to know all the issues of concern and together strategies and support of the sector so that they can also generate revenue for the country.” She said

Answering to the Member of Parliament for Tamale North Hon. Alhassan Suhuyini's question on what she will do to save Ghana’s interest about the accountability situation of the controversial AFRIMA Awards as players in the industry are not satisfied with the level on transparency even as they disagree with the decision of the former minister Catherine Afeku to invest GH₵4.5M into hosting the Awards which was initiated by a group of Nigerians, Mrs. Oteng-Gyasi said, she is aware that Ghana got the right to host the AFRIMA for 3years of which the first year has been done and so there is a chance to review the first.

“since we have executed a contract to host for 3years we will review and look at the cost benefit analysis of the first year that we have done and if it is not beneficial to us then we look at the terms of the contract and if we can get out of it with minimal consequences we do that in the interest of the industry.” She added

The minister designate said, although the industry in Ghana faces major challenges such as infrastructure and revenue mobilization, tourism has immense potential to drive the economy, contribute to the GDP and foreign exchange earnings of the country if the country can leverage on its mineral resources, unique culture and traditions we can derive lots of benefits and revenue from it.

She later joined Elvaco as well as Ansah Asare law firm She then moved on to become the legal officer at the Unilever Ghana limited and later transferred to head the legal department at GTP when Unilever diverse their interest in the textile section.

Hon. Mrs. Oteng-Gyasi has served on the judiciary and employment committees in Parliamentary