Russia At UN Raps US Over South Sudan Peace Deal 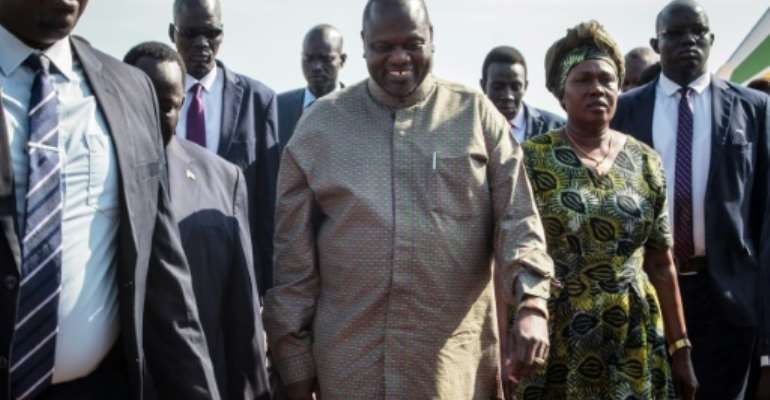 South Sudan's rebel leader Riek Machar is to be reinstated as vice president under the terms of the peace deal. By Akuot CHOL (AFP/File)

Russia took a swipe at the United States and its allies on Friday for their reluctance to embrace a peace deal for South Sudan, the latest in a string of agreements that have so far failed to end the war.

Moscow abstained in a vote at the UN Security Council to adopt a US-drafted resolution that called on South Sudan's leaders to show further political will to advance peace.

The five-year war has killed tens of thousands, uprooted more than one third of South Sudan's 12 million people and has seen horrific levels of sexual violence along with brutal attacks on civilians.

The resolution, which also renewed the mandate of the UN peacekeeping force in South Sudan for a year, was supported by 14 of the 15 council members.

Russia complained that the measure failed to welcome the peace deal brokered by Sudan and signed in September, saying this sent "the incorrect signal" to Juba's warring sides.

"We are disappointed by the stubborn reluctance of colleagues to welcome the Khartoum agreement," said Russian Deputy Ambassador Dmitry Polyanskiy.

China also voiced disappointment at the council's failure to strongly support the peace pact, but nevertheless voted in favor of the resolution.

US sees lack of commitment

The resolution described the peace agreement as "an important step forward" and a "window of opportunity" but called on leaders to "demonstrate the political will to peacefully resolve the conflict".

The measure stressed that key provisions -- which are still under negotiation -- on power-sharing and security arrangements for the return to Juba of opposition leaders were "essential" to advance the peace process.

"The US remains deeply concerned by the lack of political commitment from the parties at the national level to fully implement all tenets of the agreement," US Acting Ambassador Jonathan Cohen told the council after the vote.

The deal provides for a power-sharing government that will prepare elections, but it has been greeted with skepticism after many previous agreements failed to take hold.

A previous peace agreement fell apart when heavy fighting broke out in Juba in July 2016 following the return of Machar, who was forced to flee on foot, chased by tanks and helicopter gunships.

Under the latest deal, Machar is scheduled to return to Juba in May to once again take part in a transitional government as vice president.