Why Ex-Prez Mahama's Running Mate Should Be A Scientist 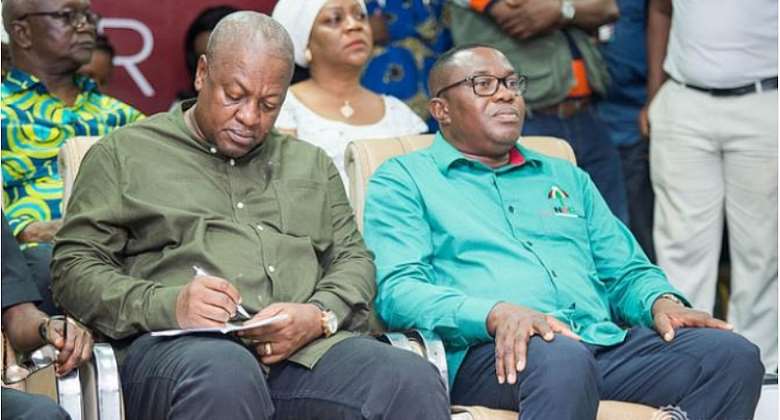 Say what you want, former president Mahama's chances in the upcoming 2020 presidential election, barring any electoral malfeasance, is brighter than future corruption in this country.

You see, in Ghana, gratitude is an ailment suffered by dogs as Joseph Stalin once observed.

Majority of Ghanaians abhor appreciation and gratitude and, as a result, would not recognize the efforts of the Akufu Addo government that has been laboriously labouring to better their lives. The same thing they did to former president Mahama.

And since no human enterprise lacks its own flaws, there are the other side of the government the opposition likes and preaches so much.

The government of the New Patriotic Party, NPP in one breadth, is literally grasping for a breath as the presidential throne is fast becoming thorns in the meat and fabric of the economy.

President Akufu Addo has virtually become a rather Defender-in-Chief of the NPP's Delta, "Invisible" and other Forces.

There's therefore no doubt former president Mahama may bounce back if the government makes more wrong moves as we count down to 2020.

Mind you, even though "all die be die", there's difference between an armed robber and a thief.

In Ghana's politically contested space, every sinner has a future and every saint has a past.

The fantasies and fallacies preached by the New Patriotic Party, NPP, have since become their greatest undoing and the worst evil that would ever befallen them after Satan.

In a country where people find it convenient and comforting to always call on government to find their misplaced kitchen keys, sweep their compounds, and even wash their undies for them, the Akufu Addo administration has become the object of hatred among the masses for not living up to par.

Some of the flagship projects implemented by the government have virtually turned into a curse in the eyes of the masses.

Besides, leadership is operated on the basis of contingency, but prudence remains a universal virtue of leadership.

A government with the largest size of government comprising of 123 or more ministers, many thought, makes a mockery of competence: using limited resources to achieve more.

And make no mistake. Forget the mushrooming of positive economic indicators. If your GDP, and even the entire economic growth is phantom, the empty stomachs of the masses would expose you!

What shall it profit a leader to grow GDP with every fundamental economic indicators being positive and yet, the living standard of the masses continues to decay and decline like a Marginal Cost Curve (MCC) in the Long Run?

What shall it profit a leader to win a pyrrhic economic performance and yet, people are literally feeding from dustbins?

Of course, it is only the fool who would, between two evils, go for the one he never tries before and not the lesser evil.

In economics, they say, the best time to buy anything is last year.

No one knows what could have happened if former president Mahama had continued.

However, having stayed outside power for four years as a one term president, President Mahama might have gone back to the negotiation table to right his wrongs if he ever makes a come back.

Yet Ghanaians are fed up of the sing song of economic jargons flexed by governments even if Mahama is to bounce back.

It is said that teach a bird to say "demand and supply" and you have made an economist of it.

This is an evidence that our problems as a country go beyond interpreting economic diagrams and tables with their jaw-breaking sophisticated jargons.

Fellow Ghanaians, isn't it about time we rescue Ghana from natural politicians?

Since the inception of the Fourth Republic, the country has been presided over by a metamorphosed Military Junta, an administrator, a tax professor, a communicator, and currently a lawyer.

All of them were assisted by competent economic team, yet our woes continue to skyrocket.

If and only if President Mahama is to make a come back, I propose a scientist as his running mate.

Ghana may need to be ran scientifically and not economically, after all "teach a bird to say demand and supply, and you have made an economist of it!

It is time to run Ghana scientifically.
It is time for scientists to govern.
God Bless Ghana,
And May God Bless Africa.