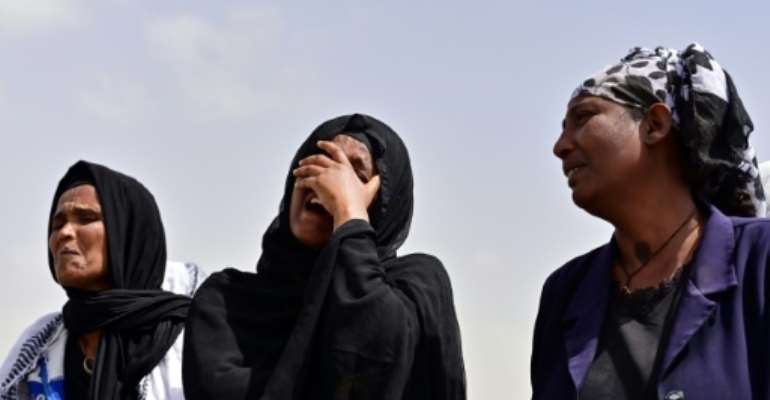 Grief: Relatives arrive at the site. By TONY KARUMBA (AFP)

From a quiet farmland at the base of rolling hills outside Ethiopia's capital, the sound of wailing rang through the air.

Devastated mourners flung themselves onto a ground littered with business cards, seat covers and shards of aluminium.

They cried the names of loved ones who had been aboard the jetliner that nose-dived into the field, leaving a dark scar in the soil but barely a trace of their existence.

"You were to be married soon! Why would you die?" one woman cried into the void.

Only the rumble of bulldozers digging for remains deep into the soil, and the pop of flares fired by police to disperse circling crows, punctuated the sobbing. 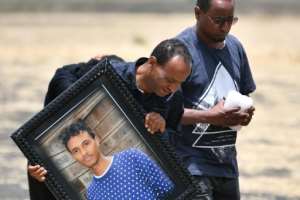 Families from 35 countries were bereaved.

Relatives began trickling to the site of the obliterated jet on Wednesday, some bussed in by Ethiopian Airlines, others on their own steam.

The melting pot of mourners all grieved in their own way, some praying, others scooping soil from the ground, while some offered fruit or flowers.

"Nobody expected this could happen to her. She loved her life," said Ethiopian Micky Kassa, whose cousin Mygenet Worku, 28, was flying to attend a UN environment conference in Nairobi.

"She has an old mother who raised her as a single parent. It's very sad news," he told AFP.

For Ethiopians, the crash is a national tragedy, and even people untouched by the disaster made the trek to the remote site to pay their respects.

Ethiopian Airlines is Africa's largest carrier and in many ways the international face of the country.

The country lost nine passengers and eight crew in the disaster.

"Every Ethiopian has to be here," said Genanaw Dibekulu, a bank branch manager who took the day off to visit the site. "It's tragic. If it had been my relative, I'd have gone mad."

As weeping filled the air, officials from the World Food Programme and other UN agencies that lost staff in the crash stood silently in a semi-circle, their heads bowed before a spread of white flowers set up to honour the victims.

Nairobi and the Ethiopian capital Addis Ababa both host large regional offices of the UN, which lost 22 staffers on the ill-fated plane.

Buses at the site near Hama Qutushele village unloaded relatives, who walked over to chairs set up under a tent, many howling inconsolably.

Some needed support as they staggered forward, while others carried framed portraits of their lost loved ones. 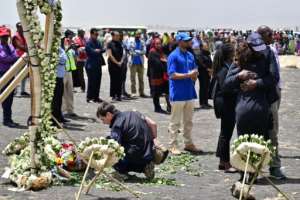 Funeral rites from different religions played off next to each other, as one man yelled "My brother!" in agony, and others repeated the same name over and over.

Investigators from the United States, Britain, plane manufacturer Boeing, Interpol, and the Ethiopian government are combing the site for clues as to what caused the crash -- the second by a Boeing 737 MAX 8 in less than six months.

Relatives of one Israeli killed in the crash demanded access to a cordoned off area where excavators are working.

"They don't allow us to access the site," complained Sahan Biton, whose uncle Shimon Reem, a security expert consulting for a Nairobi mall, was among the dead.

Under Jewish custom, Reem cannot be buried until at least some remains had been found, Biton said.

He complained that the Ethiopian government was refusing to hand over remains or to let an Israeli search team into the impact site to find more.

"Until we... have a remain, we can't bury our uncle," Biton said, standing with five other Israelis holding a flag as they sang their national anthem and recited funeral rites to honour the dead.

Witnesses have said the plane plunged nose-first into the earth, and on Thursday there were few identifiable pieces of the plane left, apart from a wheel and some tattered pieces of metal that appeared as they came from an engine. 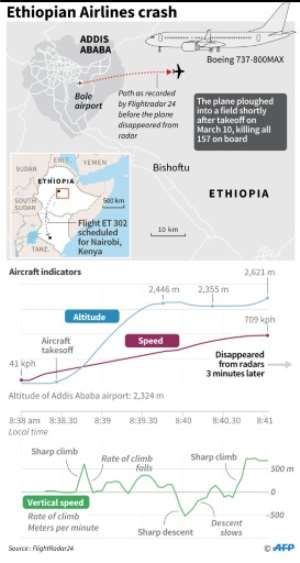 "Yesterday, I found a leg," said Zhang Jun, a Chinese construction worker whose excavator was diverted to the crash site from working on an expansion to the Addis Ababa airport.

He estimated the remains were buried as deep as 20 meters (66 feet).

Whatever belongings he has found were so damaged that when he discovered a credit card and passport, he could not decipher who they had belonged to.

"Everything is by piece, nothing in big size," he said.