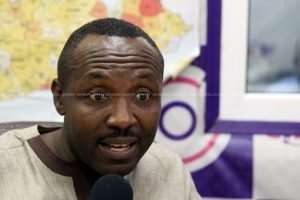 The General Secretary of the ruling NPP, Mr. John Boadu has revealed that members of a vigilante group affiliated to the party once saved his life.

He said although the party does not support political vigilantism, there have been instances where such groups have saved the lives of individuals from thugs from other political parties.

Speaking about the rise of political vigilantism, Mr. Boadu told the Emile Short Commission, recounted how he was once saved from an irate group of armed men led by Mr. Collins Dauda’s brother known as Naaba Abdulai at the Asunafo North constituency during a monitoring exercise by an NPP aligned vigilante group.

According to him, the men vowed to beat him up, and he had no option than to take cover with the ‘boys’ who escorted him since the policemen were also helpless and running to take cover.

He said the police at the area at that time was helpless.

“If you take the invincible forces, they are individual groups not an organ of the party who have sympathies for the NPP. I am a beneficiary of these groupings.”

“We heard of alot of challenges happening in the Asutifi Asunafo area, I was then the acting General Secretary to visit the area, some of the members had been beaten to pulp and some of them hospitalized.”

“On my way, I normally drive alone, but for some reasons, when I got to Kumasi to ask some of my young men to join me to visit those areas, at one of those polling stations, this gentleman got to the polling station with his men, holding guns, machetes and knives. He introduced himself to me as the brother of Collins Dauda and that we are in Accra making noise about the activities here, today he is here with me and he is going to deal with me, had it not been the presence of these gentlemen that accompanied me, it would’ve been a different story because the police was virtually helpless. Everybody was running for cover. Naaba was charging at me.”

He admitted that groups such as Kandahar boys, Bolga bulldogs, invincible forces and Delta forces are all aligned to the NPP.

He also maintained that the violence recorded at the La Bawaleshie polling station although very unfortunate does not discredit the outcome of the by-election in any way as the briefings from he had the NPP polling agents revealed that the violence escalated away from the voting centre.