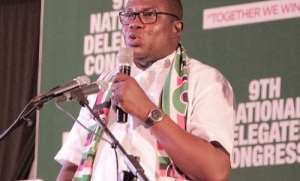 The leadership of the main opposition National Democratic Congress (NDC) has hinted said that they will be accompanying their National Chairman, Hon. Ofosu Ampofo to the CID headquarters tomorrow.

This comes after the police invited Hon Ofosu Ampofo over the alleged leaked audio linked to him with the purpose of inciting violence.

Speaking at a press conference, the Greater Accra NDC Regional Organiser, Anthony Nukpenu said although they believe the police is being used by the government to intimidate the NDC, they will, however, accompany their chairman together with other party faithful from other regions to the CID Headquarters tomorrow."

"While we are not against any lawful step by the police in carrying out their duties, we are clear in our minds that they are being used by President Akuffo Addo and the NPP to intimidate the rank and file of the NDC. This is a situation we cannot accept and so tomorrow our members throughout Accra have decided to accompany Chairman Ofosu Ampofo to the CID Headquarters," he said.

The NDC also continued to deny the authenticity of the alleged tape and blamed the CID of making a molehill out of the tape. They called on the CID to investigate previously leaked tapes if they have suddenly realized the relevance of it and sees them as materials worth investigating.

"Despite the unequivocal denial by the NDC of the authenticity of the alleged tape involving our National Chairman and the clear evidence of it being doctored, the Tiwaa Addo Danquah led CID still wants to make a mountain out of a molehill.' he said.

Our Strengthened Supervisory Role Led To Closure Of 420 Bank...
27 minutes ago