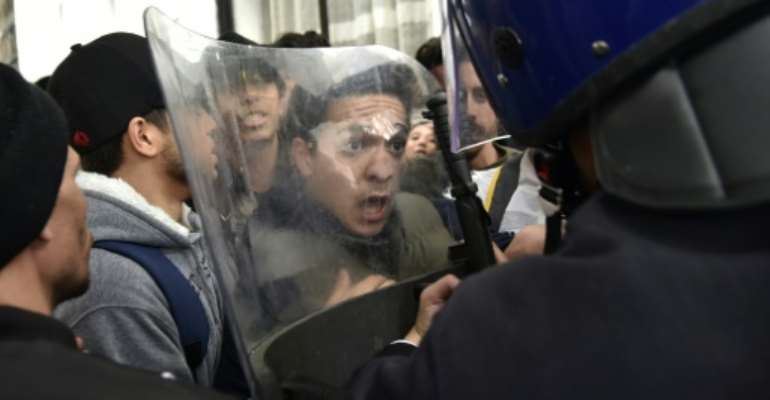 Algerian students scuffle with security forces during a protest in the capital Algiers against ailing President Abdelaziz Bouteflika's bid for a fifth term, on February 26, 2019. By RYAD KRAMDI (AFP)

Thousands of people took to the streets of Algeria's capital Friday to protest against ailing President Abdelaziz Bouteflika's bid for a fifth term in power, AFP journalists reported.

A photographer and journalist from local media were briefly detained by police and removed from the protests before being released, an AFP journalist reported.

Algerian news website TSA reported crowds had gathered at other locations around the country.

The demonstrations came a week after tens of thousands of people rallied in the North African state against 81-year-old Bouteflika's decision to stand in the April 18 election.

Protesters have been mobilised by calls on social media and say the latest demonstrations are aimed not only at Bouteflika's bid to extend his 20-year tenure but also against "the system" as a whole.

Obinim To Pay GHS1.6m Tax Liability; Court Throws Out His Ap...
28 minutes ago

2020 Elections Will Definitely Be eld – John Boadu
35 minutes ago