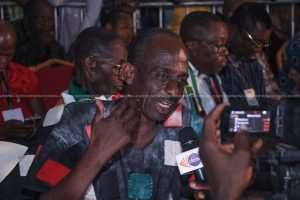 General Secretary of the opposition National Democratic Congress (NDC), Mr. Johnson Asiedu Nketia believes a meeting with the various political parties is not a panacea to ending activities of vigilante groups in the country.

To him, the alternative is to get the government to disband such groups aligned to the governing party as well as those he believes have been placed in state security apparatus to serve as an example to other political parties.

“I want to believe that a meeting between NPP and NDC won't solve any problem. Also, the President's threat of using legislation is also not going to solve any problem because there are laws in the country that can deal with this problem. What is lacking is the political will of the governing President. It takes the President alone to clean the state apparatus of the vigilantism to clamp down on vigilantism outside the state apparatus,” Asiedu Nketia told Umaru Sanda Amadu in an interview on Eyewitness News yesterday, Thursday.

There have been concerns over political vigilantism groups who have seemingly become untouchable following their alignment to the main political parties in the country.

President Nana Akufo-Addo during his State of the Nation Address on Thursday urged the political parties to meet and find possible ways of disbanding their militia groups.

The president said he will be compelled to make a legislation to force the parties to disband such groups if they fail to adhere to his request.

“I want to use the platform of this message to make a sincere, passionate appeal to the leaders of the two main political parties in our country, NPP and NDC, to come together, as soon as possible, preferably next week, to agree on appropriate measures to bring an end to this worrying and unacceptable phenomenon of vigilantism in our body politic,” he said.

“I have asked the leadership of the NPP to extend an invitation to the leadership of the NDC for such a meeting. The security services of the country will be on standby to assist this meeting… If voluntary disbandment by the parties is not feasible, then I will initiate legislation on the matter. Vigorous debate and the exchange of ideas should be the true basis of political dialogue and competition in our country, not the activities of party vigilante groups,” he added.

“That view is wrong, there is vigilantism existing in government. He should deal with it before he comes to talk about NPP, NDC and other political parties. There is vigilantism within the state apparatus and that is what is creating the problem. It is also crippling the state institutions from clamping down on vigilantism because they themselves are infested with vigilantism,” the NDC scribe argued.

The phenomenon of vigilantism has become a topical issue in the country following a surge in acts of physical attacks and assaults carried out by members of vigilante groups aligned to Ghana's major political parties, NDC and NPP.

Some of these attacks have resulted in death and injuries on victims including innocent citizens.

Recently, the presence of some masked and armed men at a polling station during the Ayawaso Wuogon by-election sparked conversations on the matter.