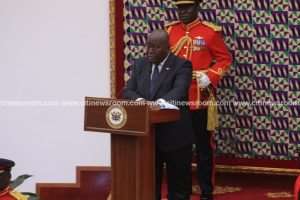 President Nana Akufo-Addo has added his voice to calls by various civil society groups and international agencies for the two major political parties in the country to disband their vigilante groups.

Delivering his 2019 State of the Nation Address in Parliament, he said he had instructed the leadership of the New Patriotic Party (NPP) which he belongs to, to extend an invitation to the opposition National Democratic Congress (NDC) to discuss how to disband their respective vigilante groups.

Akufo-Addo said the phenomenon of political vigilantism has the potential of destabilizing the country and reversing the democratic gains the country has made over the years.

“I want to use the platform of this Message to make a sincere, passionate appeal to the leaders of the two main political parties in our country, NPP and NDC, to come together, as soon as possible, preferably next week, to agree on appropriate measures to bring an end to this worrying and unacceptable phenomenon of vigilantism in our body politic,” he said.

Citing the recent violence that marred the Ayawaso West Wuogon constituency due to activities of supposed politically-aligned vigilante groups, President Akufo-Addo promised to use legislation to stop the phenomenon of political vigilantism if the two parties fail to stop it voluntarily.

“I have asked the leadership of the NPP to extend an invitation to the leadership of the NDC for such a meeting. The security services of the country will be on standby to assist this meeting… If voluntary disbandment by the parties is not feasible, then I will initiate legislation on the matter. Vigorous debate and the exchange of ideas should be the true basis of political dialogue and competition in our country, not the activities of party vigilante groups,” he added.

The phenomenon of vigilantism has become a topical issue in the country following a surge in acts of physical attacks and assaults carried out by members of vigilante groups aligned to Ghana’s major political parties, NDC and NPP.

Some of these attacks have resulted in death and injuries on victims including innocent citizens.

Recently, the presence of some masked and armed men at a polling station during the Ayawaso Wuogon by-election sparked conversations on the matter.

Akufo-Addo Commends China, US, Jack Ma, Others For Support
5 minutes ago