Kidnap Case: Don't Expect It To Be Fast Track – Police 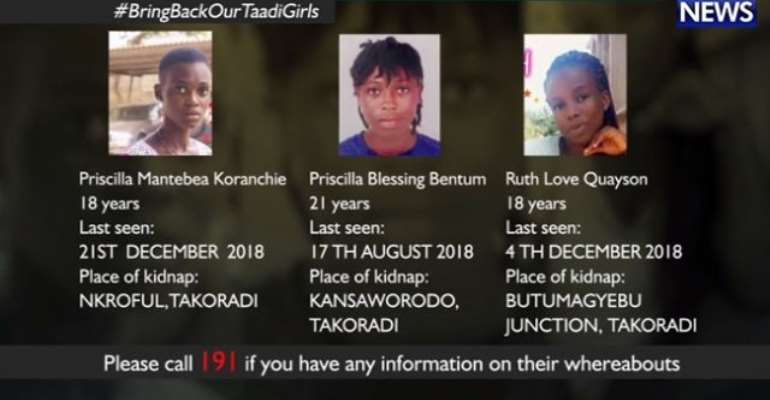 The Police in the Western Region say rescuing the teenage girls who have been kidnapped in Takoradi will not happen quickly as people wanted.

The region’s head of police, DCOP Redeemer Vincent Dedzo at a press conference said, the multifaceted nature of the issue makes it impossible for them to work as quickly as the public expects.

“Because you don’t know my procedures you will be thinking that it should happen tomorrow and it doesn’t happen like that. In criminal investigation it’s a gradual process and if you don’t take time, you’ll sidestep a lot of things.

“Initially, our concentration was on getting the suspect and the parents are complaining that we don’t come to them. So please, we are sure we will get there,” he said.

The police have received a barrage of criticism over what the families of kidnapped girls - Priscilla Mantebea Koranchie , Priscilla Boateng Bentum and Ruth Love Quayeson – describe as their lackadaisical approach to handling the kidnapping which was reported to them last year.

The families believe the police are not doing enough and indeed until civil society and some lawyers started mounting pressure on them, they have come across as not giving the issue the attention it deserves.

But DCOP Dedzo said that notion is misplaced.

He said the process requires certain procedures and the police are ensuring that all those are exhausted so as not to breach any.

“We are working,” he assured adding, “it is a gradual process. You should not expect that it will be fast track.”

He also disclosed that the prime suspect, a Nigerian, Samuel Wilson Udoterg is a known kidnapper in his home country.

Related: Kidnapped girls: Police ‘give up’ on suspect as ‘he has refused to talk’

According to him, Udoterg has been arrested and convicted for kidnapping many girls in Nigeria and left the country after he and his accomplice brother finished serving their term.

He added, however, that the police are in contact with their Nigerian counterparts to share and exchange information which will lead to the arrest of other suspects.

“Police are still vigorously searching for the kidnapped girls. The general public is urged to come forward with credible information leading to the rescue of the victims.

“We are also appealing with the parents of the victims to stay calm as the police are working around the clock to rescue them,” DCOP Dedzo assured.