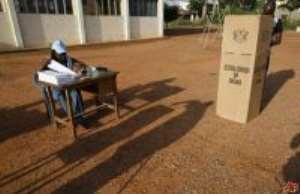 The NDC has come out with a Press Conference by attacking the integrity of the recently held referendum, questioning for instance, the large turnout and supposed election malpractices.

They claimed that, the referendum for the creation of six new regions is a total failure and a sham, and thereby view Mrs Jean Mensah as incompetent (a term reserved for John Mahama) for the job, and hence puppet of President Nana Addo Dankwa Akufo Addo and the NPP government as a whole.

Again they stated that the referendum on the creation of the new regions, was the worst election to be held in the history of Ghana.

If they are so naive to not even know, the creation of the new regions is good for decentralisation, so as to bring government closer to the people, and thereby accerelate the socio-economic development these newly yet to be created regions so much need.

Now it's clear that the NDC would not have created the regions if they had won the 2016 elections, (God forbid if they had won) even though its in their manifesto. Their attitude shows the NDC is against development of any kind, period.

If they are to know, Jean Mensah has won over the confidence of many Ghanaians, for the good start she has made, irrespective of what naysayers are proclaiming from their dented pulpits.

Even before she could adjust herself on the hot seat of managing elections in the country, the NDC hated the proposed referendum when the creation of the new regions came knocking on her offices. Yet she could not be distracted by the NDC mischief makers who continue to give her a bad name so they can hang her.

We must all wait for the EC to independently verify if the report of malpractices are true or false, before the NDC can pass a verdict on the performance of the EC.

As we are already aware, the Chair of the EC has set up a committee to investigate the so-called malpractices. The onus therefore beholds on Ghanaians to wait for the outcome of the committee's work.

On ROPAA (Representation of the People's Amendment Act), the NDC at their Press Conference stated that it should be everywhere or nowhere principle. That is, everywhere Ghanaian living on earth must be afforded the opportunity to vote. But quite unfortunately with their usual propaganda, again said the government and the EC perceived that it's an opportunity to let only people living in places where the ruling NPP supporters dominate to vote, in order to swing elections in NPP's favour.

This is childish, since surprisingly, the NDC is represented on the Advisory Committee set up by the EC to work out modalities for ROPAA's implementation.

NDC is desperate for power, although they might not come to power so soon looking at the rate of change the NPP is bringing to Ghana, but if they have issues with the referendum held in the new regions and ROPAA's implementation, something they couldn't do although the law was passed a long time ago, they can go to court (in the voice of Aseidu Nketia).