“Where is the one who has been born king of the Jews? We saw His star when it rose and have come to worship Him.” (Matthew 2:2)

Was Yeshua really born on December 25th? Do we add to the confusion or use the occasion to bring His GLORY and HONOUR by TESTIFYING YESHUA WHOM HAS BOUGHT US TO FREEDOM.? It's an opportunity to make them love and accept Him.

We will answer this question shortly. Shalom Jude Thaddeus Taylor ,wishes you all free and uncircumcised to be truly free in the Spirit.

“She will give birth to a son, and you are to give Him the name Yeshua, because He will save His people from their sins." (Matthew 1:21)

The lights of Hanukkah faded two weeks ago, and now most of the 2.1 billion Christians around the world will be celebrating the birth of the Light of the World — Yeshua (Jesus) — today.

None of the early Believers (Jewish or Gentile Christians) celebrated His birth in the first century; it simply was not a part of the early Christian tradition.

However, it is our responsibility to educate both Jews and non-Jews about the timing and the prophecies of the birth of the Messiah, and what better time to do it than today and tomorrow, which many consider to be His birthday. 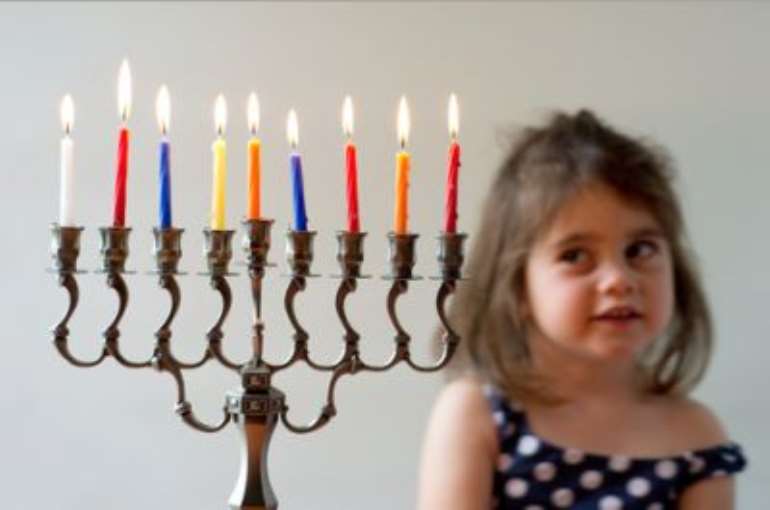 A young Jewish girl admires the lights of the fully lit Hanukkah menorah. Pray for the Jewish people that they will know Yeshua as the Light of the World.

For most Christians, a spirit of joy and tenderness is triggered at this time of the year when they remember His birth.

Among some followers of Jesus, the holiday of Christmas is reviled, perhaps because of the commercialism, but also because they understand its pagan origins.

Charles Spurgeon, a respected Baptist preacher and theologian of the 19th century, condemned Christmas as a pagan holiday.

Despite that, he understood that it was a good day to spend time with family (since there are too few times we can do so) and an excellent time to discuss the birth of the Messiah.

“Since, the current of men's thoughts is led this way just now, and I see no evil in the current itself, I shall launch the bark of our discourse upon that stream, and make use of the fact, which I shall neither justify nor condemn, by endeavoring to lead your thoughts in the same direction. … Regarding not the day, let us, nevertheless, give God thanks for the gift of His dear son.” (Spurgeon’s Joy Born at Bethlehem sermon) 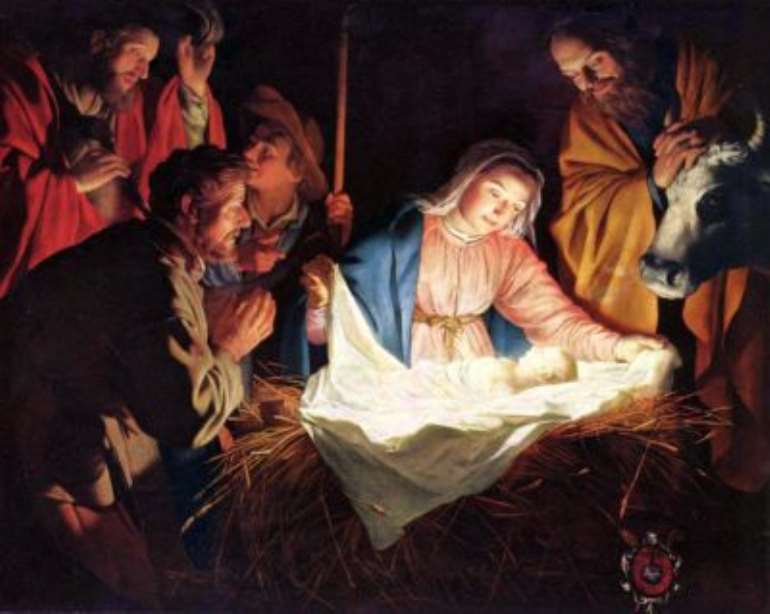 The Adoration of the Shepherds, by Gerard van Honthorst

God can use you to share Yeshua and God's love with others.

Often people are more open during the Christmas season and ready to hear the Good News.

There is a change in the air, the feeling that things are different, lighter and cheerier.

Some people, however, feel a heaviness, suffering from feelings of loneliness and depression, desperate for some good news of God’s love.

The birth of the Messiah to Miryam (Mary), a virgin, was miraculous as was the life that Yeshua lived! 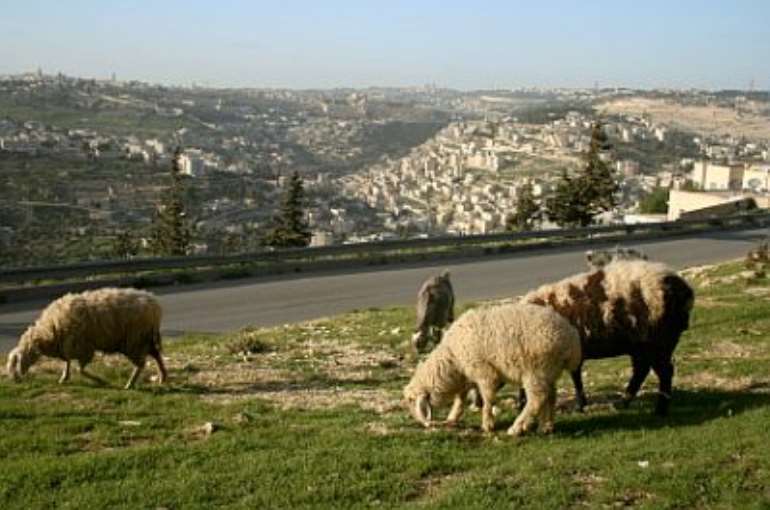 Jude Thaddeus Taylor , at this time of the year, please to let the Jewish People know about Yeshua's Miraculous Birth and Saving Grace .Let them LOVE Yeshua with DEEDS and LOVE FOR EACH other, every day not just today.

The Birth of the Messiah Many questions remain as to when Yeshua was born. Was He really born in Bethlehem during the winter?

The Brit Chadashah (New Covenant) speaks of shepherds tending their sheep in the fields:

“And there were shepherds living out in the fields nearby, keeping watch over their flocks at night. An angel of the Lord appeared to them, and the glory of the Lord shone around them, and they were terrified. But the angel said to them, ‘Do not be afraid. I bring you good news that will cause great joy for all the people. Today in the town of David a Saviour has been born to you; He is the Messiah, the Lord. This will be a sign to you: You will find a baby wrapped in cloths and lying in a manger.’” (Luke 2:8–12)

We suspect that the shepherds were watching over the sheep intended for sacrifice in the daily Temple ceremonies.

However, Jerusalem can be cold in late December, making it unlikely that the shepherds would have been able to graze their sheep at that time of the year, sleeping with them outside. 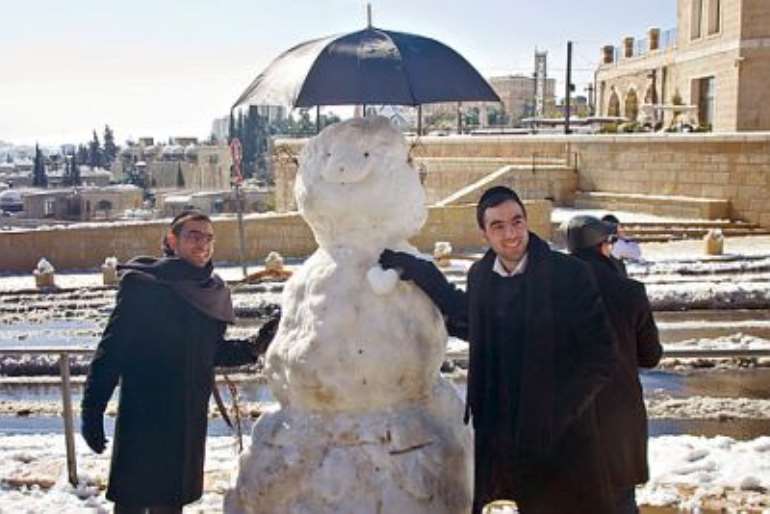 A rare snowfall in Jerusalem, near Bethlehem. Usually it is raining and cold.

While the Bible does not specify the month of His birth, we do have some clues that lead us to determine the approximate timing: 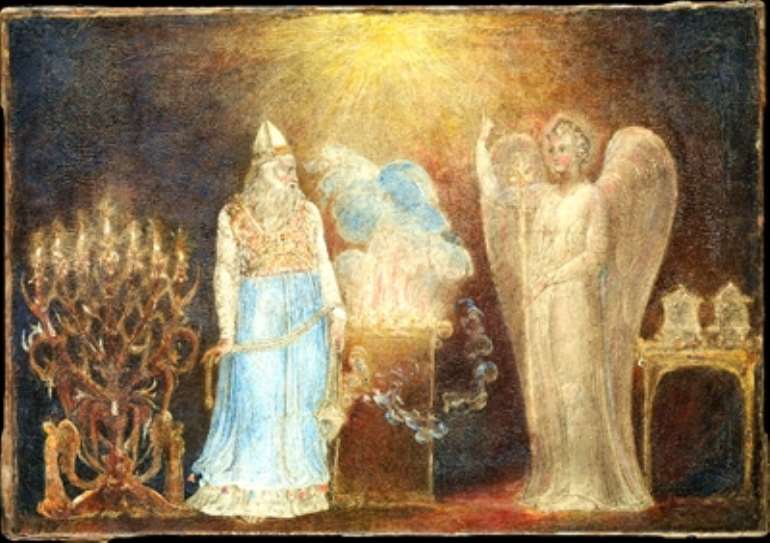 The Angel Gabriel Appearing to Zecharias, by William Blake

The Apostle John tells us how Yeshua is the Word that tabernacled among us.

“And the Word became flesh and dwelt [eskēnōsen] among us, and we have seen His glory, glory as of the only Son from the Father, full of grace and truth.” (John 1:14)

The word that John uses in Greek for dwell and tabernacle share the same root word, skéné.

“But when the Jewish Festival of Tabernacles [skēnopēgia] was near ...” (John 7:2)

Through these Biblical, historical, and linguistic clues, we can come to a fairly educated guess that Yeshua may have, indeed, been born during the Biblical Festival of Sukkot, also known as the Feast of Tabernacles.

This is one of the three specified Holy Festivals (Passover, Shavuot, Sukkot) that God tells the Jews that they must observe in Jerusalem.

Sukkot occurs in late September or early October, depending on the year. We don't know exactly the year Yeshua was born.

We also know that two of these Biblical Holy Festivals were fulfilled as He was crucified on Passover, and that the promise of the Holy Spirit came on Shavuot (Pentecost). 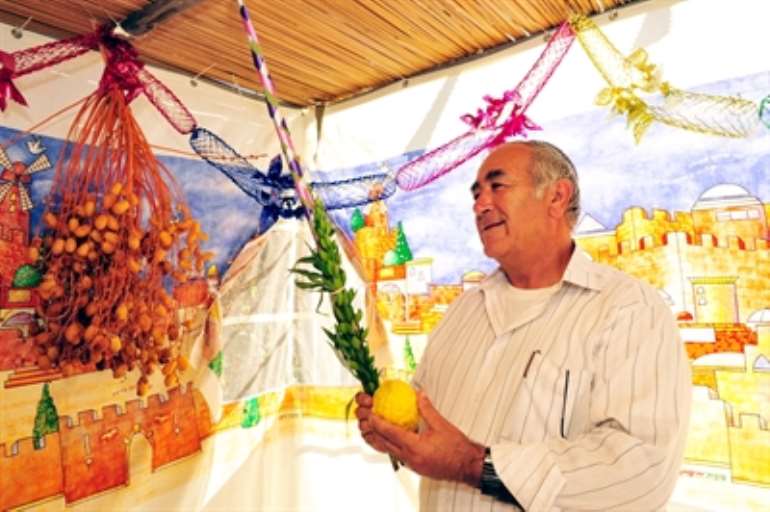 During the Biblical Holiday of Sukkot, a Jewish man prays in a sukkah. As he prays, he shakes the Four Species that are mentioned in Leviticus 23:40.

When Did the Christmas Celebrations Begin? Neither Yeshua’s Jewish disciples nor the Gentile followers in the first and second centuries celebrated the birth of Yeshua.

And there is no extra-Biblical evidence supporting the existence of this celebration in the writings of the early Church fathers, such as Irenaeus (c. 130–200) or Tertullian (c. 160–225).

Actually, Origen of Alexandria (c. 165–264) writes against following any pagan practices celebrated by the Romans.

So, it is fair to say that for the first 300 years after Yeshua's birth, there was still no celebration of a Christmas. 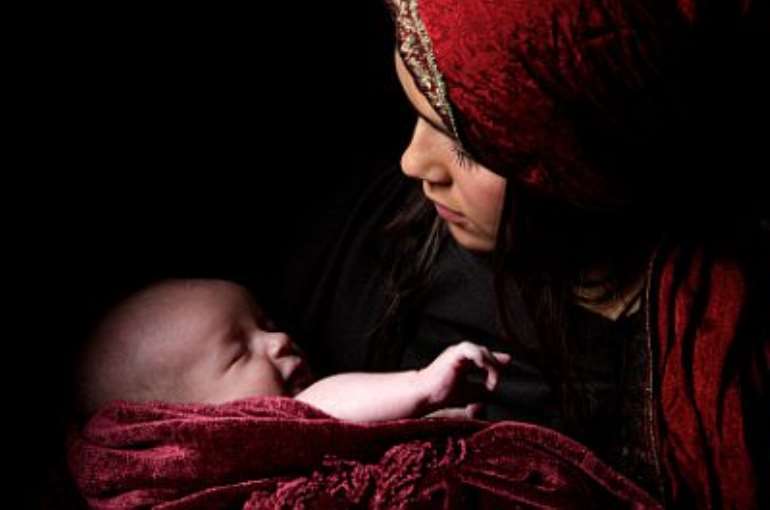 "Today in the town of David a Savior has been born to you;

He is the Messiah, the Lord." (Luke 2:11) Please help us bring the Good News of the birth of the King of Israel to the Jewish People everywhere by giving s Special Gift. Make A personal decision and effort to steer clear of sin, love thy neighbour as thyself and GOD the CREATOR will acknowledge you. Give a Special Holiday Gift

May God richly bless you throughout this holiday season

SHALOM and the grace of God, the peace of God, and the FORGIVENESS of our sins through Jesus Christ death bring you to the RESURRECTION which sits Him on the right hand of God interceding for us. Amen