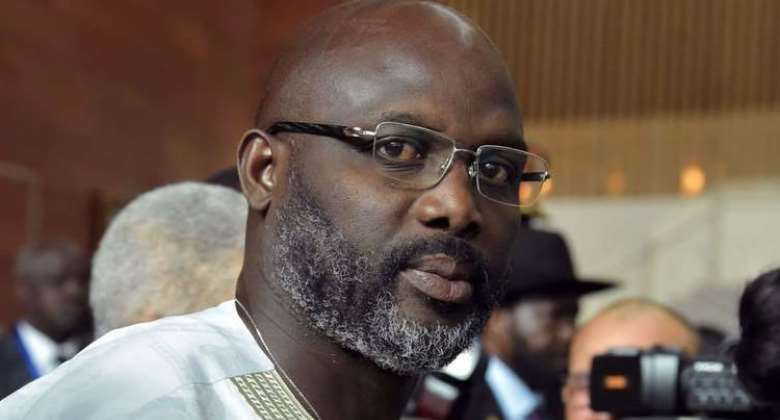 A tragedy worthy of the pen of Shakespeare is in full cycle in the homeland. The backward drift of leadership to Weah as a result of the chicanery of Ellen Johnson-Sirleaf is defiling the homeland and leaving no sector untouched without the clay of backwardness. But this is not at all strange to left activists of the homeland, as we hold the view that once the society has drifted into the abyss with George M. Weah epitomizing such trend, all other sectors will be contaminated with such stench. This is the case when even universities which were the citadels of consciousness and academies that produced men and women who placed their lives on the line for noble causes have turned into their opposites, gifting out sacred awards to patent flunkeys.

Thus, we are not taken aback by the pouring of honorary doctorate degrees on President Weah. Any sane mind will ask the question why these honorary doctorates are being bestowed on him only at the time he is President of the republic. For the past fifty years of his existence, he did not deserve honorary doctorate degrees from these universities but only within less than one year as President of Liberia. This tells you the level of hypocrisy, deception and lack of national consciousness on the part of many members of the petit intellectual bourgeois class of the Liberian society. This level of sycophancy is entrenched in the foundation of the state. Imagine some of these same elements told Liberians that the illiterate despot Samuel K. Doe dux the University of Liberia in 1988.

These elements who vacillate, shift pendulum between the oppressed and oppressing classes and have not the courage of men and women who make society reexamines itself, has always pander to the whims and caprices of anyone (be it a mad man or not) who sits over the decrepit apparatus of the decayed neo-colonial state. This is one of the surest ways some of our so-called academics are assured portion of the taxes and royalties given to government by the multinationals, wage slave workers, Lebanese and Indian merchants, struggling Liberian businesses, etc. And one wonders why the educational system has been moribund and bankrupt since the emergence of the Liberian state.

So seeing Dr. William Allen gowning an intellectual dwarf with the academic regalia of a giant is one of the episodes in the farce and it has no toil on my inner being. What sparked my curiosity is the reaction of the mass of people after the media was bombarded with the news that President Weah has been given another honorary degree but this time around by the University of Liberia. We have not seen the people expressed similar excitement they expressed when Cuttington University bestowed its version of honorary doctorate degree on President Weah earlier this year. While just few bureaucratic parasites have been desecrating social media with the UL’s honorary degree, the mass of people have been passive, inertia and indifferent. The people care not! They have shown no interest in singing praises to the Emperor this time around.

The country is at the brink of socioeconomic collapse. The socio-economic system is bankrupt and cannot develop the productive forces for the benefit of the people. The people presiding over the state suffer from the poverty of idea and cannot institute social transformation. As the promotion of the people’s welfare is consigned to the trash pile, looting, plundering, and the mismanagement of state resources by George Weah and his handlers are the norms rather than the exceptions. President Weah is leading the caravan of opulent lifestyle while the people are being crushed by the amalgam of poverty, disease and ignorance. The new breeds of social elites are vaulting their overnight acquired wealth in the face of an economically deprived people.

These and other social contradictions are acquiring pivotal place in the consciousness of thousands of Liberians; thus they do not care whether the University of Liberia bestows a doctorate degree on Weah or not. The people are living on the brink of destitution and the inability and insensitivity of Weah in whom they had so much illusion is rapidly changing their consciousness. Thousands of people are beginning to question their love they have for George Weah and his CDC and in the not too distant future the society will begin to portray the objective conditions for a social revolution as neither Weah nor the system has the capacity to transform the society. The necessity for the motor force for human progress would emerge sooner than later.

But the people must be educated that the progressive forces who are preparing themselves to fast track the process of social transformation are not anti-establishment agents. We do not struggle because we are against Weah and his cabal of looters. We do not struggle because we want to capture the neo-colonial state apparatus and think we can use such apparatus to change the society. We struggle because we are convinced that the dominant socioeconomic system of neo-colonial capitalism as a social relations of production interacting with the productive forces (labour power, agriculture, science, mining) cannot develop the forces of production for the purpose of creating a qualitative change in the Liberian society wherein men and women produce the basic means of life to supply the social needs of all and sundry.

Insofar such a system along with all its superstructures remains in place, no matter who occupies the three branches of government, the rapid development of underdevelopment will continue unabated. Foreign monopoly capital will not only continue exploiting the labor and resources of the country but also limiting the development of the productive forces to the production of raw materials for exportation, expatriating vast portion of the surplus values instead of reinvesting in other sectors of the economy and paying paltry sum in royalties and taxes to national government.

The taxes and royalties will continue being allocated to the wage bill of national government which caters to huge salaries and emoluments of public officials who make it possible for the wholesale exploitation of the country. Piece meal development in education, health, infrastructure, etc. will continue being at the mercy of aid, grants, handouts and goodwill from extracted from the sweat and blood of workers from OECD countries. With no industries to locally produce consumer goods, the economy will remain import-based; thus paving the way for Lebanese and Indians to continuously dominate the retail and wholesale of imported commodities. This must change!

Moses Uneh Yahmia is a 2018 graduate of the University of Liberia. He can be reached via [email protected]