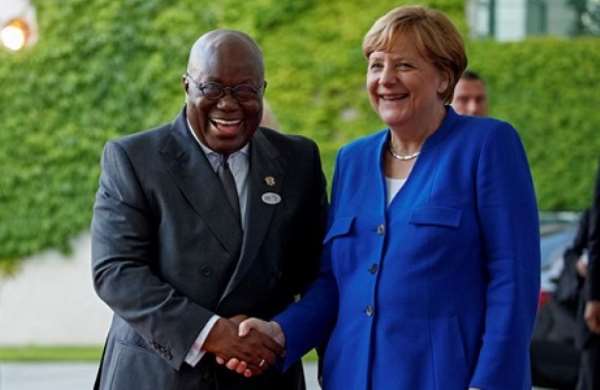 The colonial exploitation of African countries became one of the foundations of the heyday of capitalism in Europe and for centuries supported the economic expansion of the Old World, and then the United States.

At present, Africa is again viewed by Europeans, America and China, as a promising source of resources, control of which is vital for ensuring further development. On the other hand, Africa is getting poorer and poorer battling to live a normal life amidst vast resources

The role of Africa in the history of Europe and America, as a whole cannot be overestimated. It would not be an exaggeration to say that Europe, known to us - a global center of economic, technological power, a special model of development, a reliable system of social guarantees, exists today because of Africa.

That is, the riches that were literally plundered in Africa by Europeans and without this organized robbery, which lasted for centuries and still taking place in different methods, today's prosperous Europe would not exist.

Apparently, the Europeans continue to see Africa as a reservoir from which to draw resources for development. This is indicated by the persistent attention with which the leaders of the European Union recently relate to the Black Continent.

This attention was manifested quite recently and became noticeable especially after the Brexit. The exit of Britain and the EU forced the union to look for a new paradigm of existence in the face of increasing competition for a place under the sun.

In January 2017, German Economic Cooperation Minister Gerd Muller proposed launching a new Marshall Plan for Africa. He called on African countries to develop their own economies with the help of the EU, which will lead to mutually beneficial results.

In May , one of the most prominent European politicians, the Minister of Finance in Germany, Wolfgang Schäuble, said "For us, the Europeans, the complexity largely come from Africa, with all due respect to the continent if we do not manage to reduce the wealth gap, all of us will face a very serious threats. "

And shortly thereafter, the newly elected President of France, Emmanuel Macron, made his first visit outside Europe to Africa, in order to visit the French military stationed in Mali. Then in Paris, came to the UN Security Council with the initiative to create united armed forces of five African countries to fight jihadists in the Sahel zone, that is, in the regions lying directly to the south of the Sahara.

And these days in Berlin in the framework of the preparation of the G-20 summit, an international conference devoted to the problems of Africa is being held. Speaking at its opening, Chancellor Angela Merkel, in particular, said: "If the situation in Africa is too hopeless, then, of course, young people will think about looking for a better life somewhere else. Therefore, if we act together to help your countries, we will provide greater security for ourselves and will be able to stop people who are illegally cashing in on the fate of others. "

In a word, there is a desire of the two leading European powers, Germany and France, to turn Africa into an object of active European politics. And although they operate under the slogans of combating terrorism and illegal migration, there is no doubt that their true goal is to once again make the Black Continent a source of resources necessary for the future development of the EU.

It would seem that there is nothing fundamentally new in this formulation of the problem. Africa, being the object of exploitation, must remain so. But at the present stage, the struggle for Africa acquires a special meaning for Europe.

The fact is that the EU began the process of building up the United States and the Anglo-Saxons as a whole, including Britain. This means that the West’s “solidarity” that existed until now is becoming a thing of the past, and former allies are turning into competitors. In this context, the goals of the African strategy of the European Union can be formulated as follows: "Africa is for Europeans!"

Europeans will not only have to win and defend their positions in Africa. The Chinese penetration is no less and perhaps a greater one. In recent decades Beijing has increased its trade and investment in Africa many times. Arab investors, Israel and Turkey are also showing genuine interest in fighting for African resources.

All this proves that the fight for Africa will be fierce and long, while Africa itself remains poor, the fact that they depend on foreign powers to solve their problems. But the truth is, these foreign powers are interested in Africa for their own selfish gain to flourish the economy of their country.