The Agony Of Christians In China 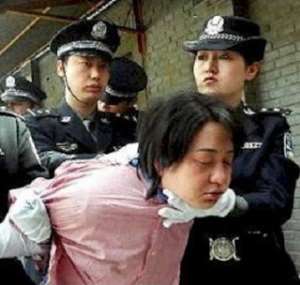 “Blessed are those who are persecuted for righteousness' sake, for theirs is the kingdom of heaven. Blessed are you when others revile you and persecute you and utter all kinds of evil against you falsely on my account. Rejoice and be glad, for your reward is great in heaven, for so they persecuted the prophets who were before you,” said Jesus.

He knew what lies ahead and what will happen to Christians after his death. Like a prophecy being fulfilled the Chinese Communist Party in the past and present is dismantling cross, closing churches, and persecuting Christians. The churches in China are suffering from extinction.

However, in the United States and other countries, almost all Chinese churches are blind and indifferent to the suffering of their Chinese church members, while in Africa because of business the Chinese like Christians. The CCP’s persecution of Christianity in Henan is shocking.

According to the founder of the "Chinese Christian Justice Fellowship" in the United States, Pastor Liu Wei, so far, Henan has dismantled more than 7,000 church crosses, far exceeding the 1,700 dismantled in Zhejiang Province from 2014 to 2016.

In that year, Zhejiang didn't only split the cross, but this time the CCP authorities in Henan arbitrarily interfered with the activities of the church. For example, children were not allowed to enter the church, and the worshippers were required to sing the national anthem and sing red songs during the service, asking the pastor not to speak.

In regard to house churches that refuse to sing the national anthem and accept the core values of socialism, the Chinese authorities have banned and destroyed them. The authorities didn’t only send violent personnel to break down the church and the cross but also smashed piano and the furniture.

In February this year, the Chinese Community Part begin to implement the newly revised Regulations on Religious Affairs. The new round of persecution of the church was carried out in accordance with this regulation. The persecution began in Henan and will soon be extended to the whole country.

More seriously, the CCP is re-interpreting and annotating the Bible. The new translation will incorporate the core values of socialism and reflect the socialist characteristics of Christianity. As a result, the Bible becomes a socialist textbook, even if Chinese Christianity exist or completely wiped out.

The believers who insist on Christianity only turn underground and become members of the secret house church. The continuous persecution of Chinese Christianity has shocked the Christian churches around the world.

The Apostolic Archbishop, Sebastian Camacho Bentancourt, recently sent a letter to Pastor Liu Wei, over the CCP’s persecution of the Henan Christian Church and expressed concern but it seems the Christians are losing the battle against the ill-treatment of the Chineses authorities.

So far, in the entire Chinese community, only the "Chinese Christian Justice Fellowship" founded by Pastor Liu Wei and individual democracy organizations is able to hold a protest rally at the Chinese consulate.

Hundreds of Chinese churches in the United States have not responded to the persecution of Chinese Christianity and the persecution of domestic church members, not even express a little concern. The 6 million Chinese in the United States and the 50 million Chinese overseas are silent. Actually, the US government is the first to react to such abuse of human rights but not in China.

God's people with true Christian faith are not afraid of the persecution or evil forces. This is the difference between Christians and non-Christians. Over the years, overseas Chinese Christian churches have become more and more, but many Chinese are not joining the church for the pursuit of faith, but for the loneliness of seeking and solving problems or dissipating overseas life.

Xi Jinping of China loves money than God
“In God, we trust,” that’s what America says but the fact is a true country that loves God and treasures the words of the Holy Bible will not see other Christians being persecuted. America either uses God's name to deceive or Democracy to commit crimes in the third world countries. They have no true Christian faith, and they never intend to dedicate themselves to God's faith. Only a few know God in that country.

Even Africa, where Christians are all over, voice hasn’t been heard condemning this inhuman act by the Chinese government but the governments are proud of their loans and keep boasting about the Communist Party’s development in Africa.

"Beloved, do not be surprised at the fiery trial when it comes upon you to test you, as though something strange was happening to you. But rejoice insofar as you share Christ's sufferings, that you may also rejoice and be glad when his glory is revealed. If you are insulted for the name of Christ, you are blessed, because the Spirit of glory and of God rests upon you."

That’s the words of comfort and healing from the Saviour Jesus Christ to all those suffering in His name.