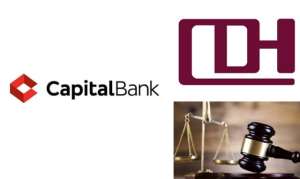 Defunct bank, Capital Bank , has gone to court to recover over GHâ‚µ100 million being debts owed it by CDH Financial Holding and CDH Savings and Loans .

The bank, which was among the two banks that were taken over by state-owned GCB Bank over severe liquidity challenges, wants the High Court to order the Defendants to pay the full amount [ a total of GHâ‚µ109, 390,634.70] plus the accrued interest.

The defunct bank also wants the Court to order the Bank of Ghana to withdraw the licenses of the Defendants ( CDH Financial Holding and CDH Savings and Loans ) for their inability to pay back investment on maturity dates.

Embattled
Meanwhile, Capital Bank and its shareholders have also been dragged to Court over the collapse of the bank last year.

The Plaintiffs Messrs Vish Ashiagbor and Eric Nana Nipah from PricewaterhouseCoopers say the bank’s collapse was a “direct result of defendants” “misgovernance” and “willful” breaches of banking regulations.

Challenges
The banking sector is only recovering from challenges that began with the collapse of Capital Bank and UT Bank in August 2017.

The two banks were subsequently absorbed by the state-owned GCB Bank.

Although the central bank assured that there would be minimal job losses, scores of the staff of Capital bank and UT bank were asked to go home and never return.

In 2018, the regulator took again took sweeping measures that shook the industry: it took over five more banks and created the Consolidated Bank Ghana to take over their assets and liabilities.

The Bank of Ghana has said indicators will soon point to stronger banks as a result of its sweeping reforms.

Speaking at the Joy Business Financial Services Forum on the theme ‘The Changing Tide of Ghana's Financial Services Sector: The Cause, the Cost, and the Clean-up’, Deputy Governor of the BoG, Elsie Addo Awadzi, revealed Thursday that the regulator is still monitoring the sector to ensure that banks meet the minimum capitalisation requirement by the end of the year.

A. An order directed against the defendants jointly and severally for the recovery of an amount of eighty-three million, four hundred and eighty-nine thousand, one hundred and twenty-three Ghana Cedis and twenty-nine (GHC 83,489,123.29) and five million and two hundred and eighty-nine thousand, three hundred and fifteen united states dollars and seven cents (US$ 5,289,315.07) being the outstanding amount agreed as owed to the Plaintiff by the Defendants [CDH Financial Holding and CDH Savings and Loans] on or about December 31, 2017.

D. Damages for breach of contract.
E. Costs.
F. An order directed at the Bank of Ghana to withdraw the licenses of the defendants for their inability to pay back investment on maturity dates.

G. Any other reliefs) as may seem fit to the honourable court.