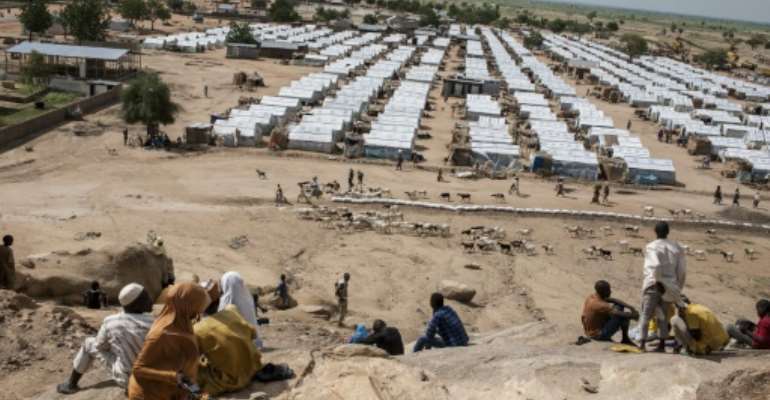 The Boko Haram insurgency in northeast Nigeria has forced tens of thousands of people to flee their homes. By Stefan HEUNIS (AFP)

The Red Cross on Sunday appealed to Nigeria to secure the release of two abducted health workers, as a deadline set by Boko Haram to kill them approached.

The International Committee of the Red Cross (ICRC) spoke out a month after another hostage kidnapped with them was executed by the jihadists.

"A deadline that could result in the killing of another health care worker is less than 24 hours away," said an ICRC statement.

"Speed and urgency are critical," it added.

The three female health workers were kidnapped on March 1, in the remote northeastern town of Rann following an attack by IS-affiliated Boko Haram faction.

Two of the kidnapped women, Hauwa Liman and Saifura Khorsa, worked for the Geneva-based humanitarian charity while the third, Alice Loksha, worked for the UN children's organisation UNICEF.

There was no news of the trio until last month. Then the ICRC said it had received footage of Khorsa's execution from the IS-supported Boko Haram faction --- Islamic State West Africa Province (ISWAP).

In the footage, ISWAP threatened to kill the other two health workers if their demands were not met.

"The ICRC asks all those involved with this case to avoid a repeat of that devastating outcome," said Mamadou Sow, ICRC's head of operations in the Lake Chad region.

The ICRC called on ISWAP to show "mercy" and not to kill two health workers who were "doing nothing but helping the communities in northeast Nigeria".

"Hauwa and Alice are medical workers who chose to work and help vulnerable communities in Rann, an area heavily affected by violence," Sow said.

The jihadists have increasingly turned to kidnapping for ransom as a way to finance their operations and win back key commanders in prisoner swaps with the Nigerian government.

Rann is a remote town on the border with Cameroon where over 60,0000 people who have fled from Boko Haram jihadists depend on emergency food and medical aid to survive.

The ICRC also called for the release of 15-year old Leah Sharibu who was among over 100 schoolgirls abducted by the Islamist group from a boarding school in Dapchi in February.

While her colleagues were released weeks after the abduction, Sharibu the only Christian among them, was held back for refusing to convert Islam.

"Leah Sharibu...is also being held by the same armed group and everything must be done to ensure she too is released promptly and unharmed," said Patricia Danzi, ICRC's Africa director of operations.

"We urge you: spare and release these women...like all those abducted, they are not part of any fight," said Danzi.

President Muhammadu Buhari from the mainly Muslim north, has promised to secure the release of the hostages.

A government delegation visited Sharibu's parents on Friday and assured them of efforts to free their daughter.

E/R: Teachers boycott class as unknown persons use faeces to...
7 minutes ago

A/R: Decomposed body of lady found one week after boyfriend ...
7 minutes ago