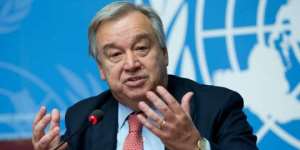 United Nations Secretary-General Antonio Guterres on Thursday said he was "deeply saddened" by reports that 200 people have died in floods in Nigeria.

"The secretary-general extends his condolences to the families of the victims and to the Government and people of the Federal Republic of Nigeria and wishes the injured a speedy recovery," said a statement issued by the secretary-general's spokesman.

"The United Nations expresses its solidarity with Nigeria during this difficult time and stands ready to support as required," said the statement.

In addition to the rising death toll, 1,300 people have been reportedly injured and nearly 2 million affected by the recent flooding in areas along the Niger and Benue rivers in Nigeria.

More than half a million have been displaced and over 350,000 are in need of immediate humanitarian assistance.