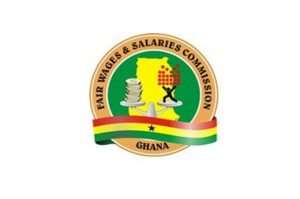 Workers of the Fair Wages and Salaries Commission, who are mandated to work on fair wages for public sector workers, are themselves on a sit-down strike to demand placement on the Single Spine Salary Structure.

They also want to be involved in the migration process onto the salary structure.

When Citi News visited their offices, the workers had red bands wrapped around their hands and wrists to register their displeasure.

The Constitutional Review Commission recommended that salaries and conditions of service for the staff at the Commission be determined by Parliament to avoid any conflict of interest.

The workers argue that if management is failing to involve them in the processes, then complying with the constitutional review commission's recommendation would be best.

Meanwhile, Citi News has gathered that management is currently in a closed-door meeting to address the matter.

Launched in 2010, the SSSS was to promote equity within the public sector by ensuring that public sector workers received equal salaries for equal work done.

Implementation of the policy experienced some setbacks during its initial stages with intense agitation from public sector workers who complained about some disparities in the policy.

The issues were subsequently rectified, but the agitations have not ended.

Some analysts have attributed the country's expenditure overruns to the inefficiencies regarding implementation and management of the pay policy.

The public sector wage bill continues to be the biggest threat to government expenditure.

A recent analysis by the Graphic Business newspaper revealed that wages and salaries for public sector employees consume almost half of all taxes collected every year.

Meanwhile, the government says it will soon review the single spine salary structure.

President Akufo-Addo while speaking earlier in 2018 said the review would take into consideration productivity, comparative salary standards in the private sector, and international salary standards among other factors.

“As we seek to establish a world-class labor force comparable to any in the world, we must address the concerns of workers in the public sector over their remuneration. An inter-ministerial committee is being established by the Ministries of Employment and Labour Relations and Finance, to undertake the review of the single spine pay policy and make recommendations for implementation by the government,” he added.