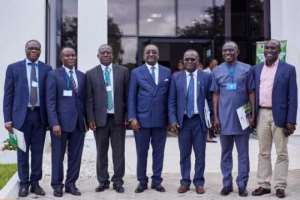 Professor Eric Danquah, the Founding Director of West Africa Centre for Crop Improvement (WACCI), University of Ghana, has called for transformative changes of agriculture and food systems in Africa.

He said current forecasts placed the sub-Saharan Africa as the only region in the world where hunger and malnutrition would worsen over the next two decades unless some drastic measures are taken to avert the situation.

'There is an urgent need for a drastic change within the food and agriculture system in sub-Saharan Africa if the region is to attain Sustainable Development Goal 2: zero hunger by 2030,' Prof Danquah said at the WACCI Conference on Food and Nutrition Security in Accra.

The two-day conference, which was formally opened by Dr Owusu Afriyie Akoto, the Minister of Food and Agriculture, is organised by WACCI as part of activities marking the 70th Anniversary of the University of Ghana, on the theme 'The March Towards a Hunger-Free Africa'.

The over 100 participants attending the meeting drawn from across the globe include academics, researchers, representatives of civil society organisations and policy makers.

Prof Danquah said WACCI was an institution with a glorious past and a future; declaring that the Centre was one of the top-tier higher education institutions globally in plant breeding and related subjects impacting food and nutrition security in Africa and beyond.

Giving the historical perspectives of WACCI, Prof Danquah said 11 years ago, the Centre received its first grant of five million dollars from the Alliance for a Green Revolution in Africa (AGRA).

'Today, WACCI stands as the pre-eminent Centre for plant breeding education at the PhD level in all of Africa, by current enrolments, graduations, partnerships and investments, prepared to lift millions out of hunger and poverty,' he said.

'WACCI is more ambitious than ever. Our released maize hybrids, the highest yielding hybrids in Ghana now under commercialization, the international accreditation of our two programmes, Plant Breeding, and Seed Science and Technology, our state-of-the art labs in this edifice, all achieved in the last year are now history to us,' he said.

'We want to become an unstoppable Centre of Excellence. We are leading a consortium of partners, both public and private, including civil society groups to establish a global platform for agricultural innovation and entrepreneurship driven by good science and technology to make Africa's dream of food and nutrition security realized in our lifetime,' he added.

Prof Danquah expressed the hope that the conference would open doors for the collaborations needed for urgent action to address the challenges of African agriculture.

Prof Ebenezer Oduro Owusu, the Vice-Chancellor of the University of Ghana, called on African governments to invest more in agriculture in order to ensure food security on the continent.

'Today, conversations on food and nutrition security have taken centre stage globally, because of the urgency for the world to end hunger, achieve food security, improve nutrition and promote sustainable agriculture,' he stated.

He noted that the 'Rearing for Food and Jobs' would focus more on promoting the poultry industry in the country.

He noted that the College of Basic and Applied Sciences was made up of six schools, two institutes, 30 departments and seven centres of which WACCI was part.

Come out and declare your commitment to fight against galams...
4 minutes ago