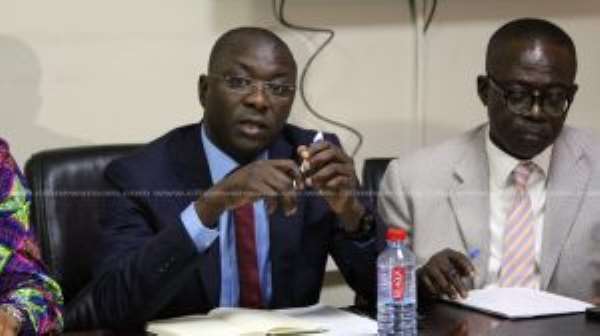 A Deputy Minister of Energy, Dr. Mohammed Amin Adam, has maintained that prices of fuel at the pumps would have been much higher than what is being experienced if the Akufo-Addo government had not scrapped some of the taxes on petroleum products.

His assertion follows calls for the government to scrap the Special Petroleum Tax to bring some relief to Ghanaians, as fuel prices have hit the 5 cedi mark with diesel going for GHc5.18 pesewas per litre, and petrol 5.14 per litre.

This sparked renewed concern over the taxes on petroleum products.

Speaking at a press conference on Thursday, Dr. Adam stated that the government was taxing responsibly.

“We can also generate revenue through taxes, but we are doing it responsibly… We have reduced the total tax component in the petroleum product prices from 40 percent in March 2017 to 26 percent,” he said.

“That is how a responsible government can generate revenue through taxes on petroleum product prices without injuring the welfare of the Ghanaian,” the Deputy Minister assured.

The Minister for Energy, John Peter Amewu, had also said the tax reductions announced by the Akufo-Addo government since it assumed office in 2017, have cushioned Ghanaians against the impact of the fuel price hikes.

According to him, Ghanaians would have been paying eight percent more for fuel if the government had not reduced and scrapped some taxes in the 2017 and 2018 budgets.

The Minority's solution
Currently, the Minority in Parliament is demanding the scrapping of the special petroleum tax as a measure to cushion Ghanaians as the prices of petroleum products keep rising.

According to the Minority, the tax has outlived its usefulness at a time when world market prices allow the government to make a windfall of $10 million d per day from crude exports.

“That means every day government is making a surplus of $10 million. By this, the special petroleum tax has nowhere to fill in the gaps in respect to the oil prices. And that is why we are calling on President Nana Akufo-Addo to as a matter of urgency scrap the special petroleum tax. Currently, it's about 46 pesewas per litre, and if it's about five litres a gallon, you are talking about Ghc2.2. If you calculate it as a percentage that's about 10%,” the Minority Spokesperson on Mines and Energy, Adam Mutawakilu said.

The Special Petroleum Tax initially 17.5%, was placed on petroleum products by the erstwhile Mahama administration in 2015.

Though the current government had criticized its introduction when it was in opposition, it only reviewed it downwards by 2.5 percent in the 2017 budget.

“When there is a change, or the dollar is stronger than the cedis, then it means that you need more cedis to source for your products. In the last two weeks or more, the dollar was just around 4.7, but it has moved to 4.95; a depreciation of 4%.”

ACEP backs calls for removal of some fuel taxes

Energy Think Tank, Africa Centre for Energy Policy (ACEP), has backed calls for the government to bring relief to fuel consumers by scrapping some taxes from the petroleum price build up.

“There will be the need for government to pass on relief to consumers. I don't know to what extent…but scrapping of some taxes should be considered as well,” he added.