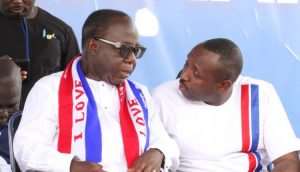 The National Council of the New Patriotic Party (NPP), will today, Wednesday, meet to confirm the appointments of Deputy National Officers.

The Deputy National Officers are expected to assist national officers in the discharge of their duties.

Information reaching Citi News however indicates that Nana Obiri Boahen who was recently allegedly caught on tape making some allegations against the presidency and was subsequently reprimanded by the party, will be maintained as one of two deputies to the General Secretary.

Member of Parliament for Adentan, Yaw Buabeng Asamoah, will be appointed the substantive Director of Communications.

The NPP held its 26th National Delegates Conference on July 7, 2018, at Koforidua in the Eastern Region, giving the party the opportunity to recount its gains over the last few years.

The party also used the opportunity to elect new leaders to steer the administrative affairs of the NPP for the next four years.

At the end of the election process which lasted over ten hours, acting Chairman of the party, Freddie Blay was given the nod to continue serving in that position, this time, in a substantive capacity.

John Boadu was also elected as the NPP's General Secretary.