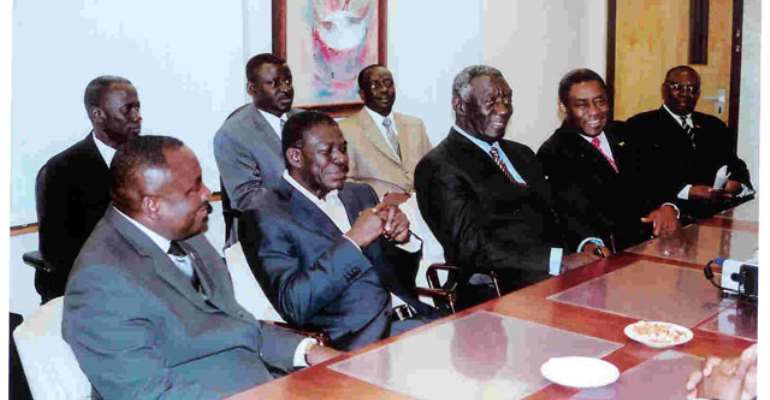 His Excellency Mr. John Agyekum Kufuor, President of the Republic of Ghana has assured the management of Ghana International Bank in London of his Government's commitment to renew the lease on the property housing the bank for another term.

Negotiations are currently underway to renew the 100-year lease held by the Government of Ghana on the building at number 69 Cheapside Street which is scheduled to run out in 2007.

The President gave the assurance when visited the Ghana International Bank during a brief stop-over in London. He was accompanied by his Secretary, Ambassador D.K. Osei, , Mr. Kwabena Agyapong, Press Secretary and Presidential spokesman, Mr. Isaac Osei, Ghana's High Commissioner to the UK and his Deputy, Mr. Adolphus Arthur.

The President praised the management of the bank for catering to the banking needs of the Ghanaian community in the UK and urged them to diversify their products and introduce strategies that would enable the bank to compete more effectively in the current globalised environment.

President Kufuor who started his career as a Legal Manager of the bank in 1964, said the government would continue to evolve policies that would facilitate the growth and enhance the competitive edge of Ghanaian businesses both inside and outside the country.

The President promised to favourably consider the bank's request to Government to channel the nation's proceeds from the Millennium Challenge Account through the bank and encouraged the bank to strive even harder to hold high the flag of Ghana.

Established as an offshoot of the Ghana Commercial Bank in 1998, Mr. Kairu explained that the bank's mission was to act as a catalyst to spur sustainable economic growth primarily to Ghana and across the entire African continent.

In keeping with this vision, the General Manager affirmed that the bank which had been supporting Ghanaian banks and companies like the Ghana Cocoa Board, Ghana Civil Aviation had now extended its transactions to banking institutions in Nigeria, Malawi, Kenya and many other African countries.

He hinted that Ghana International Bank was poised to continue its strong performance chalked over the past few years with a targetted profit of £4.6m in 2005, an increase of 120% over the £2.1m posted last year.

High Commissioner Osei attributed the exponential growth experienced by the bank in recent times to the introduction of cash cards which allows Ghanaians as well as other customers of the bank to access banking services from various locations within the UK.

Ms. Beatrice Nunoo presented a set of cufflinks embossed with the bank's logo to the President on behalf of the management of the bank in commemoration of the historic visit. President Kufuor was later taken on a tour of the bank premises by Mr. Kairu. Picture caption: President Kufuor (Centre) and his entourage at the meeting. From left. Mr. Kwabena Agyapong, Ambassador D.K. Osei, Mr. Isaac Osei, and Mr. Adolphus Arthur.