An Open Letter To The State...National Cathedral: Please, Don’t Do It! 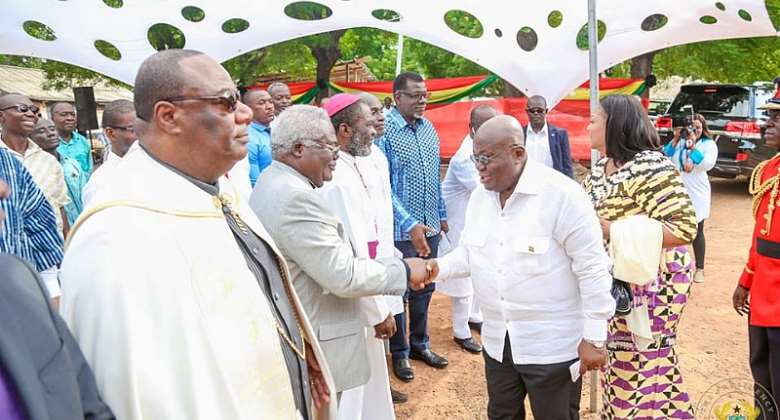 Ghana’s founding was based on the struggle for independence from colonial rule. The mothers and founders of our modern state believed in an Almighty God and worshipped according to their faiths but never pushed it as a religious crusade to create a religious state. The British knew better when even during the high-handedness of colonial rule they did not impose any religion on us. The European missionaries who trooped to the colony, built churches, chapels, cathedrals and other places of worship, while the Muslims did their own in their mosques and traditional worshippers found solace in their “shrines”.
After independence, Osagyefo Dr. Kwame Nkrumah maintained a strict division of religion and state, allowing all religions to flourish according to their doctrines and modes of worship without let or hindrance playing to the rules of a secular state. This has been the status quo since. After a succession of civilian and military governments, that delicate balance has been kept and it has served us well. It is not uncommon in Ghana to see places of worship belonging to different faiths or denominations coexisting on practically the same space.

During the PNDC era, the regime stepped in to equalise a little vexing issue concerning national holidays. Christians had since colonial times enjoyed Christmas and Easter as national holidays whereas the major Muslim festivals of Eid-el-Fitr and Eid-el-Haja went unheralded. The PNDC legislated them into national holidays and today all Ghanaians participate in those festivals. A forward-looking and unifying move or a secular state pandering to religious diktats – be that as it may, the equalisation seems to have settled that matter…

Ghana is a country where religion is taken seriously, to the extent that it can be described as the fastest growing industry. With the advent of evangelical Christianity, mega and hyper churches have sprung up and are in fierce and uncompromising competition with each other. In this landscape of competition, what they all have in common and show off without modesty and humility, are their equally mega and hyper auditoriums (cathedrals) of worship.

The more traditional Christian groups like the Catholics, Methodists and Presbyterians have equally huge edifices of worship strewn all over the country. The Catholic Cathedral at Adabraka in Accra is one of the most impressive and awe-inspiring buildings in the city. The crucial truth is that all these Christian denominations are always adding to their real estate inventories because they do not expect the state to dip into the national exchequer directly or indirectly to fund their worship. Through all kinds of fund-raising exercises, they have become extremely wealthy, a fact that can be seen in the lifestyles of their leaders.

Muslims have not stood idly by in this surfeit of places of worship. With mosques springing up all over the country equipped with several decibel strong sound systems to call the faithful to prayer, they have a very audible presence. Controversially, to some they have become something of a noisy intrusion. Professor Frimpong Boateng, Minister for Environment nearly came to grief when he remarked to that fact.

The idea of a National Cathedral, based on a Christian concept of worship is therefore cutting too close to the edge of state interference in religious matters. It needs no lawyer or Supreme Court judge to rule on its unconstitutionality. A question, which on the surface is laughable, but serious, is who would be the presiding bishop or overseer of such a cathedral: President of Ghana, Minister of State, Chairperson of Council of State, Speaker of Parliament, Chief Justice? And if it would be a “Man or Woman of God”, which of the many denominations would such a person come from? Would the Muslims qualify? We can already see the unnecessary “wahala” such a cathedral would be driving the state/nation of Ghana into.

We are told it would offer space for national events with spinoffs including tourism – and actually nothing else. Estimated at around US$90 million in construction costs, other costs including maintenance, repairs, replacements and other administrative costs and overheads are waiting to be sprung on the Ghanaian taxpayer. In fairness to our national priorities this would be a clear misapplication of our taxpayer resources. It has the whiff of an ego trip or pretention towards a legacy monument. With the former that would be an unwarranted expensive trip at the expense of the taxpayer. As a legacy pretention, there are many more useful projects crying for attention: Our education system, in dire need of funds to operate could do with a slice of that. Our hospitals and clinics, in need of cash to provide some basic diagnostic tools and drugs, could do with a slice of that – the list is inexhaustible.

Can it be that with all the possibilities of growth, added value on our natural resources through manufacturing that are calling for investment, it is a cathedral that is allowed place of precedence? Are these priorities lost on this government?

How can the State wade into commercialization of religion? Religious groups are more than capable of doing so on their own. There is a good reason for keeping the state out of religion. Choice to be religious or of religion is a personal right, any government meddling with religion simply wants to sow seeds of division and cause unrest!!

In terms of tourism, who are the targets? Americans? Europeans? Chinese? Japanese? Other African countries? Or Ghanaians…? Is it not laughable to even stretch the imagination and picture loads of planes flying into Ghana to see a cathedral?! Houphoet-Boigney’s epic basilica is rotting away in Yamoussoukro, an hour or two away from Accra as our own Larabanga Mosque is decaying from neglect. A slice of that money would revamp our tourism sites from Paga to Dixcove and Aflao to Half Assini, which with proper marketing bring in plane loads of tourists. The National Cathedral in Washington DC was built by a predominantly Christian nation whose founding pioneers arrived from Europe with a clear Christian agenda – some of them were actually escaping Christian religious persecution. To take that as a reason or model for replication in Ghana is as egregious as it is provocative. A more acceptable proposition would be the construction of another international conference centre with all the specs of this so called national cathedral to add to our conferencing capabilities, that is if we consider such an investment a priority.

Words coming out of certain mouths, purely on religious grounds on this issue do not bode well for Ghana’s continued cohesion. Though very low level at this stage, some are beginning to see things as a Christian and Muslim issue. Those with a Christian turn of phrase aver that because there is a major national mosque springing up in Accra, something similar should spring up for Christians. The Muslims counter by saying that the mosque is not a government project and should not be used as an excuse to use taxpayer money to put up a Christian cathedral and certainly there was never a National Mosque Project with an office at the presidency. The original Accra Central Mosque (National?) at Makola was pulled down some years ago and the state had no hand in the replacement.

A Muslim group, the Coalition of Muslim Organizations of Ghana (COMOG) has already waded in with a strong denunciation of the project. These are the drip, drips, that eventually gush into social unrest tsunamis. Let us not allow a cathedral to lead to that…Please, for God’s sake, don’t do it!

*A post script: Where is Mahmoudu Bawumyah in all of this?