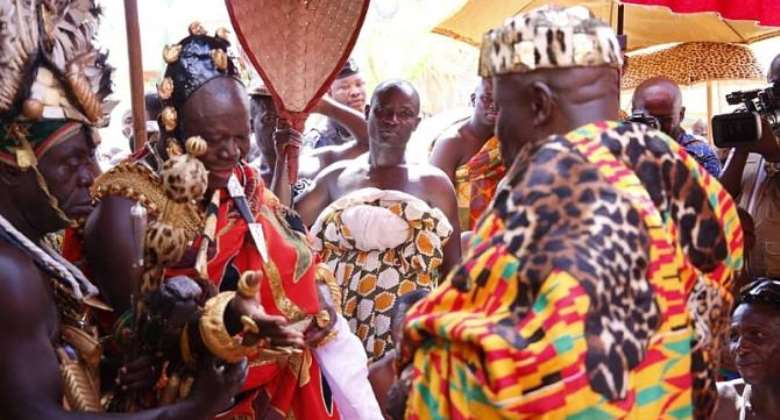 It was the first time an Asante king has gone to Kyebi since 1742 and in peace.

The visit was deemed historic because of the cultural tensions that exist between Asantes and Akyems is to mark the 75th anniversary of the death of the chief of Akyem Abuakwa Traditional Area, Nana Sir Ofori Atta I.

In a Citi News interview, Barima Fredua Agyeman Okutumin, Osamkahene of Okyehene, said Otumfuo’s inviting was historic and one that signified the strong bond between the two leaders.

“The Okyenhene wanted a special guest, and he invited his brother to become the special guest. The records that I have been given, this is the first time the Asantehene is coming on the scale in the public session. I am told in these mythical things of the past that there were strong bonds between the two palaces from way back.”

Hundreds of Akyems and Asantes thronged the Ofori Panin Fie, the Palace of Okyehene in Kyebi to mark the 75th anniversary of the death of Nana Ofori Atta I.

A celebration of 75th anniversary significant

The Osamkahene, Barima Fredua, further indicated that the 75th-anniversary celebration was to acknowledge the many contributions of the late king towards the transformation of the Akyem Abuakwa state.

“We are here to celebrate Nana Ofori Atta I; we are using his passing, 75 years ago today to mark his achievements to expose it to our people and the world. He did quite a lot for the Ghanaian humanity, and so we must appreciate it and continue to benefit from it. We have been benefiting from it without showing appreciation. You know how it is in Ghana people tend to think that it is not worth suffering for your people. But we want to show that it is so he is evidence of that. So basically, we are here to celebrate his life.”

About the late king
Earlier in August, Chiefs, Queen mothers, Elders and people of Okyeman both home and abroad launched the 75th Anniversary celebration of the late King of Akyem Abuakwa, Nana Sir Ofori Atta I.

The event took place at Ofori Panin fie, under the auspices of Osagyefo Amoatia Ofori Panin, and was highly attended by all divisional chiefs and queen mothers within the Abuakwa Traditional Area.

He was also the longest-serving African on the Legislative Assembly (then the de facto Parliament) of the Gold Coast”.

He is the first traditional ruler to establish a stool treasury from which he funded and founded the Abuakwa Scholars Fund, the establishment of the first Government trade school as well the Abuakwa State College popularly called ABUSCO”.

The 75th Anniversary of his death in 1943, seeks to remember, reflect and reclaim the many achievements in his memory.