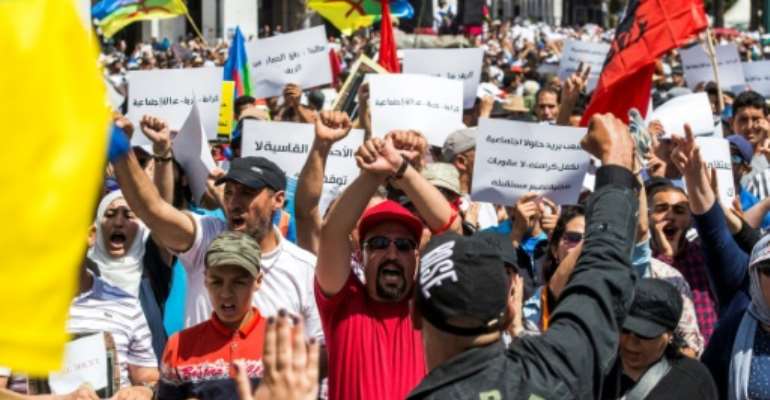 Moroccan demonstrators hold their hands up in a bound gesture while shouting slogans as they wave the Berber, or Amazigh, flag during a protest march against the jailing of Al-Hirak al-Shaabi or "Popular Movement" activists in Rabat on July 15, 2018. By FADEL SENNA (AFP/File)

The 11 militants were serving two to three year jail sentences, in the western city of Casablanca, for their part in the Al-Hirak al-Shaabi, or "Popular Movement" whose protests rocked the country's northern Rif region in 2016-2017, according to the National Council on Human Rights.

The total number of convictions tied to Hirak are not known, but the protests have led to more than 400 arrests, the rights council says.

The movement's leader Nasser Zafzafi, sentenced with three companions to 20 years in prison for threatening the security of the state, was not among those on the pardon list. Nor was journalist Hamid el Mahdaoui, sentenced to three years for covering the events.

The social unrest linked to Hirak began in October 2016 after the death of a fisherman and spiralled into a wave of protests demanding more development in the neglected Rif region and railing against corruption and unemployment.