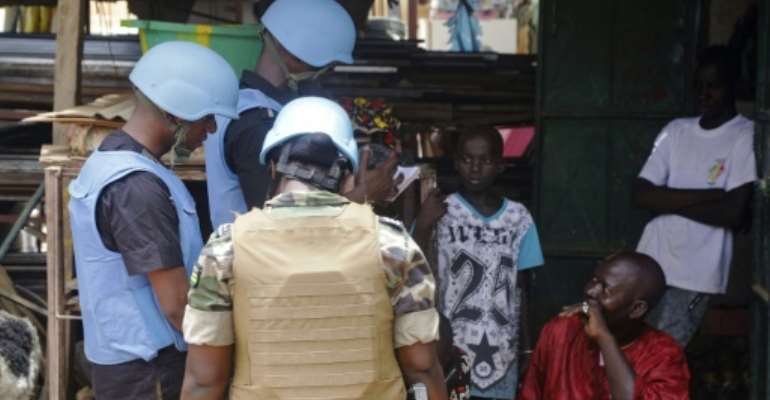 Members of the MINUSMA, the UN peacekeeping force in Mali (pictured July 16, 2018), are looking into allegations of summary executions and forced disappearances, in which the Malian government acknowledges its forces are implicated. By ISMAEL DIALLO (AFP/File)

Mali's security forces are facing allegations of killing civilians, dozens of whom were summarily executed during recent operations against Islamist militias, according to a UN report seen by AFP on Thursday.

The government has acknowledged that its forces were implicated in the killings after several mass graves were discovered in central Mali between February and July.

In the report sent to the Security Council, a UN panel of experts said it had reviewed information "that suggests a worrying pattern of human rights violations against civilians by the security forces during counter-terrorist operations."

The report lists three incidents during which Mali's forces allegedly targeted civilians, one of which left 12 Malians dead in a cattle market.

The government initially described that attack as the work of terrorists but retracted the statement following an uproar from the victims' relatives.

By late April, the UN peacekeeping force in Mali, MINUSMA, was looking into "allegations of 44 summary executions and three enforced disappearances," said the report sent to the council on Wednesday.

Since then, there was the attack on the cattle market in May and the discovery in June of three separate mass graves with the bodies of 25 civilians arrested during a house-to-house sweep, the report added.

While the government has launched investigations of the summary executions of the civilians, there has been no information on actions taken against the soldiers that were implicated.

The report also said that "a large number of civilians have been killed in terrorist attacks since February" in northern Mali, where armed jihadists have their strongholds.

A flurry of attacks by the Islamic State in the Greater Sahara and affiliated militia has killed at least 143 civilians between February and early June in the area bordering Niger, it said quoting MINUSMA.

Islamic extremists linked to Al-Qaeda took control of the desert north of Mali in early 2012, but were largely driven out in a French-led military operation launched in January 2013.

A peace deal between the government and armed groups was signed in 2015, but implementation has been slow and attacks have continued in the center and north of the country.

The panel said it had identified individuals and groups involved in attacks against Malian forces who could be put on a UN sanctions blacklist.