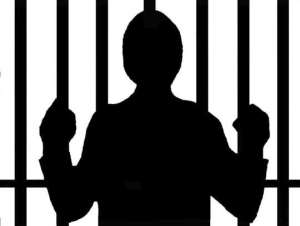 An Accra Circuit Court has sentenced Gideon Alateyvi to ten years imprisonment for impregnating a 13 year old girl at Alajo, in Accra. The victim, a class six pupil is now four months pregnant.

Alateyvi aka Kwame Gideon a trader is said to have taken advantage of the victim when she went to his house to fetch water.

Ablative pleaded guilty to the charge of defilement and was convicted accordingly by the court presided over by Mrs Abena Oppong Adjin-Doku.

Prosecuting, Chief Inspector Kofi Atimbire said the complainant who is also a trader and a mother of the victim lives with her at Alajo.

Chief Inspector Atimbire said the convict's house is adjacent that of the complainant.

Prosecution said there is no water pipe in the complainant's house and as a result the complainant sends the victim to buy pipe-borne water from the convict's landlady.

The Prosecution said one evening in April this year, whilst the victim was going to fetch water she was directed by the convict to pick his mobile phone from his room for him.

Prosecution said the victim obliged and went to the convict's room to pick the phone, the convict followed her to the room, pounced on her, and had sex with her.

After the act, Alateyvi gave the victim GH¢10.00 and warned her not to disclose this to anyone or else she would die.

Prosecution said out of fear the victim kept this ordeal to herself until July 22, this year, when her mother noticed some changes in her requested for a pregnancy test for the victim.

According to prosecution, the victim was found pregnant and upon persistent questioning by her mother she revealed her previous ordeal and mentioned Alateyvi as the culprit.

The Prosecution said on July 25, this year, the complainant reported the incident to the Tesano Domestic Violence and Victim's Support Unit where a medical report form was issued for examination of the victim.

Mr Atimbire said the complainant returned the medical report form which was endorsed by a medical officer of the Police Hospital to the Police.

He said when the accused was arrested he admitted the offence in his caution statement and stated further that he and the victim had consensual sex and that it was the only occasion he had sex with the victim.