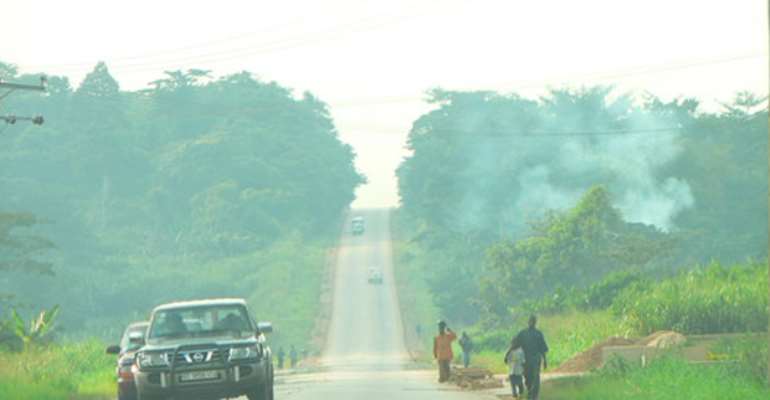 Following the collapse of the Denkyira Empire at the Battle of Feyiase in the 18th Century, the royal family of Denkyira scattered all over the Akan hinterland.

So she settled at “Gyene gyene” which was corrupted by the white man to become JINJINI. It soon flourished as a predominantly agricultural settlement and during the boom of the cocoa industry several rich farmers emerged and built a fairly big community.

I was born there and went to elementary school there, at a time when Jinjni was ten kilometers from Berekum, with two villages, Domfete and Juadede in between.

Today, as I write this article, Berekum has swallowed Jandede and Domfete, and Jinjini is today only ONE kilometer from Berekum. In fact I have built my personal residence in Berekum at Domfete!

Under our current law, District Chief Executives are NOMINATED by the President, sitting in Accra, and the Assembly Members must CONFIRM the nominee by votes of at least two thirds majority.

I have always argued, together with my late boss, Kwadwo Baah Wiredu, at Local Government, that every DCE must be directly elected by popular universal adult suffrage – that way, the DCE will be a product of the people, answerable to the people. It will save Central Government in Accra so much worry and embarrassment.

Fortunately, the NPP Administration is seriously bent on going ahead with plans to elect DCEs, but in the interim, the old order continues – where the President “makes” the nomination.

I am from Jinjini and I can assure readers that the choice of the people for DCE is a top NPP guru, three times parliamentary aspirant, CLEMENT. He is the party's choice.

But some people, especially, somebody in Jinjini who is in a high place does not want Clement. I so well remember that in the run up to the nomination, operatives from Jubilee House asked me whether CLEMENT was okay for DCE and I gave thumbs up for him.

It is an open secret that my successor in the Legislature prefers a Candidate who does NOT vote in the District and does not live there, and he managed to get him nominated as DCE.

Then came the day for the confirmation by the 27 member District Assembly. In his own words, the nominee, Martin Obeng Adjei doled out a total of 54,000 Ghana cedis; that is over 500 million old cedis as inducement fee at 20 million cedis per Assembly member.

Where did he get that money from? I know him in Berekum, as a retired educationist living in his brother's house. I am very sure that he does not have that cash on him. So, who gave him that money? Or was it a loan from some micro finance company?

Wherever he got the money from, definitely, he would have to pay it back, with interest, of course. How can you start work as DCE when you have a deficit of 500 million cedis to clear?

A true story is told about one chap who upon becoming DCE saw some “stray cash” – in the coffers of the District Assembly and he used it to buy a house in Sunyani but in the name of his trusted friend.

Our elders say there is no secret on earth, because even walls have ears. Those your drivers, your secretaries, your bodyguards, you think they love you?

The purchase leaked and the NDC leadership of the party confronted the DCE – he denied it and went on radio to say that the house he is alleged to have bought was actually bought by his friend.

So, his friend, like Othello's lago, turned to look at him and said to the DCE – THIS IS MY HOUSE; till date, as I write………

The tragedy of our political environment in Ghana today is that it seems political office is for the highest bidder. Primaries are cocoa season for delegates – some collect from all candidates, creating a false impression that they are for you. “I swear, if you get one vote, it is from me”

Stunned, bemused, deflated and totally discombobulated, he sponsored his 'landguards' to pay midnight visits to known opponents, demanding a refund of his envelope; what a scandal!

Instead of keeping quiet and giving everything to God and hoping that his name would again be renominated, he has done the unthinkable – disgracing everybody, including Chiefs, that they collected bribe, but did not vote for him so he wants a refund!

The opposition NDC, then in power, did something very excellent in 2012. When they saw the outcry of NPP rank and file over money crazy primaries for the selection of Parliamentary Candidates, the NDC leadership quickly amended their Constitution and demanded that all Parliamentary Candidates must be elected by every card bearing member of the Party. Period!

Oh! Would that my party NPP follow suit. Let all officers of the party be directly elected by card bearing members so that you make your manifesto your output, not your pocket power to a few delegates to be the deciding factor.