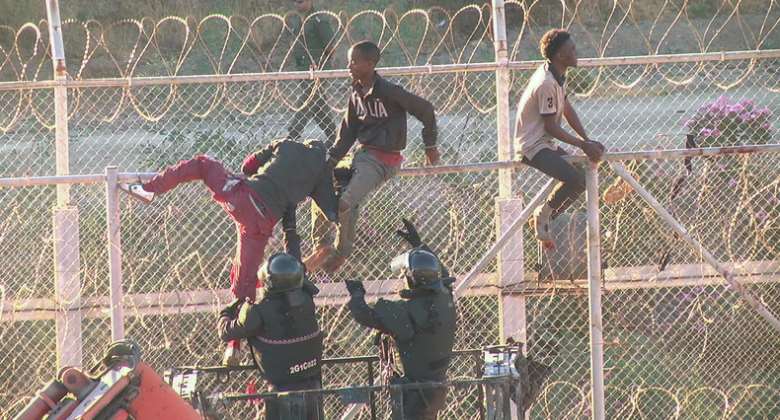 Only on Thursday migrants stormed the strictly secured border of the Spanish exclave, the region Ceuta. However, the government does not want to upgrade the border fences - but to disarm.

Despite Thursday's migrants' turmoil, the Spanish government is sticking to its plans to remove the controversial razor-sharp blades on the border fences of the African exclaves of the Spanish regions of Ceuta and Melilla. The removal should be "immediate," said Home Secretary Fernando Grande-Marlaska in a radio interview.

On Thursday, more than 600 refugees, mostly Africans through the Moroccan territory had forcibly invaded the Spanish region of Ceuta.

According to police spokesperson, this was one of the most recent and also one of the most brutal migrant storms of recent times on the exclave on the Strait of Gibraltar. Among other things, migrants were supposed to have lit spray cans and used them as "flame throwers". Several policemen and migrants were injured.

Maintain security level "with less cruel means"
Madrid guarantees that the level of security can also be "maintained with less cruel means," said Grande-Marlaska. Opposition allegations that the Spanish immigrant reception system is facing collapse, given the rise in numbers of refugees in recent months, the minister said. He accused the conservative predecessor government of having taken no action "to counter this foreseeable development".

The kilometre-long border fences between the territory of Morocco and the Spanish regions of Ceuta and Melilla were first provided with blades in 2005. Two years later, they were removed because of increasing criticism, before the conservative government of Mariano Rajoy in 2013 at the borders of the exclaves again NATO wire with blades attached.

Migrants who try to climb over the fifty-foot fences keep getting injured. According to human rights organizations and doctors, some people even bleed to death. Nevertheless, the flow of predominantly African refugees from sub-Saharan Africa hardly breaks.

The Spanish government is under pressure because the plan to remove the blades from the fences was announced by the new socialist government in mid-June just a week after Prime Minister Pedro Sánchez took office.